We want Versus events to be fun, even if you’re not at the top of leaderboards, without making the competition at the top any less interesting for the players who love it.

The thing that’s most likely to turn players away from Versus Tournaments, especially those who aren’t super competitive, is losing progress toward rewards. A way we attempted to make this better in the past was with a different way of giving out progression rewards, based on how many matches you’ve won instead of how many points you have. The trouble with that system though was that different players take a very, very different number of wins to hit a particular score threshold - without making the progression rewards completely trivial for everyone to earn, it had to take longer for some players to earn rewards than they were used to. Some players loved wins-based progression and others hated it.

We want to make both groups happy. So we’re combining the two systems in a way that we’re hoping gives you the best of both worlds.

Starting with the upcoming off-season, all progression rewards in Versus Tournaments have a points goal and a cumulative wins goal. Once you have acquired that many points OR that many wins, you’ll get the reward. 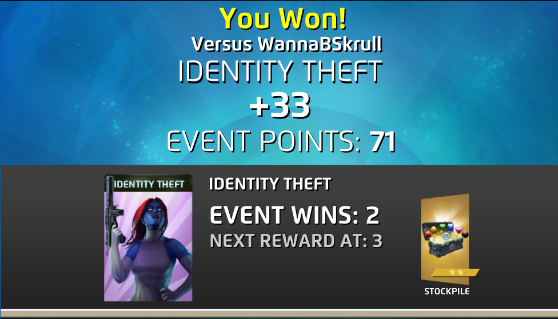 For those of you that played in earlier tests of the Versus wins system, the number of wins you need for each reward tier is similar to the last test we ran. (We’ve added a few rewards to progression since then, so the numbers are slightly different.) Unlike the last run of the test, we’ve kept the Command Points reward in progression.

We’ll also be using this system in the S.H.I.E.L.D. Simulator that runs with each season. We won’t be using it for the season’s progression rewards though - we want those to reward consistent competition over the course of the season, and that doesn’t work if you can grind out a zillion wins to get all the rewards in just one event. No changes to lightning round rewards either - we want those to stay just as fast and cut-throat.