Magnetic Repulsors - 9 Blue AP
The power now deals damage. 4 enemy special or random basic tiles are moved to the center of the board. The 4 center tiles are then converted to red basic tiles (they are charged at power levels 4 and 5). 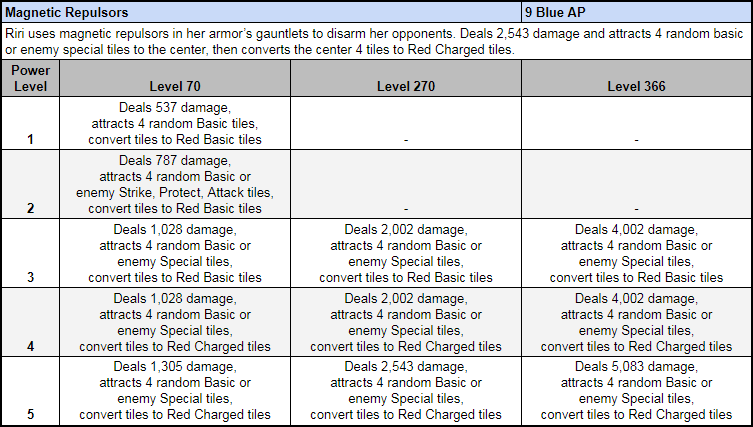 Remote Control Gauntlets - 11 Red AP
The power now deals damage to all enemies that are not in front. If there is only one enemy, it deals twice the damage to the enemy.

Selfless Intervention - 8 Green AP
The power deals damage to the target, sending them Airborne (3 turns at power level 5). If there are at least 4 enemy special tiles, Riri is sent Airborne for one turn.

AP
Riri uses her magnetic repulsors in her armor's gauntlets to disarm her opponents. Attract 2 enemy Attack, Protect, and Strike tiles to the center of the board.

At 270 these numbers are exactly the same.

AP
Riri launches her gauntlets, maneuvering them remotely towards her opponent. They attack from the flank dealing 1169 damage to the target and placing a 4-turn Countdown tile that unlocks and removes 1 enemy Attack, Protect, or Strike tiles.

AP
Riri makes a split second decision and flies into the action. Deal 521 damage to the target. Her armor reacts to the impact sending Riri Airborne for 2 turns and her target Airborne for 1 turn.