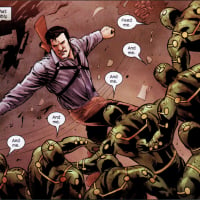 JamieMadrox Posts: 1,798 Chairperson of the Boards
January 2016 edited February 2016 in MPQ General Discussion
R91 brought with it lots of changes including the following:

Related to Champions, we’ve updated power, health and match damage for all of our characters:

3 and 4-Star Hero powers have been adjusted. Powers are stronger at lower levels, slightly weaker at medium levels and unchanged at Max Level. 2-Star Characters have had their health adjusted above level 94 to better balance them against each other. As part of the Championing balance changes 2, 3 and 4-Star characters will see a slight difference in match damage and health. Ability and match damage of 2-Star, 3-Star, and 4-Star characters have been re-tuned when above their Max Level."


We'd like to get your feedback on your thoughts on the characters that you've noticed have been balanced. What do you like, what don't you like, suggestions, etc. We can't guarantee that it will mean any major changes, but we have it on good authority that this thread will be monitored. Please be specific with hard numbers where possible. The Characters forum still has the pre-balance stats so refer to them where necessary.

So give us your honest opinions and please keep it civil and constructive. Last thing I want is Malcrof locking my thread.
0
«12345»