Spider-Man has a brand new Support arriving in Marvel Puzzle Quest today: his ever trusty Spider-Sense! 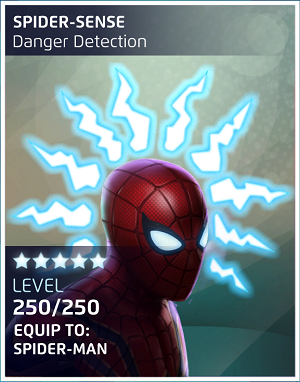 (All Perk descriptions listed at level 250)

Rank 1: The supported character takes 8% less damage from enemy matches.
Rank 2: The supported character's base Green match damage is increased by 132.
Rank 3: At the start of battle, there's a 70% chance to gain 3 Green AP.
Rank 4: Damage from enemy powers is reduced by 726.
Rank 5: At the start of the turn, there's a 20% chance to create a strength 294 Protect tile.
Equip to Spider-Man (Infinity War): New Red, Green, and Blue tiles have a 15% chance of being Web tiles on Spider-Man's turn.