Oktagon_Support ADMINISTRATORS Posts: 2,593 Chairperson of the Boards
May 2021 edited May 2021 in MtGPQ General Discussion
(*Important note: Anything listed below is subject to change before release. We will try to update any changes in a timely manner, but please keep in mind the info below is not guaranteed.)

“When opponents make their first match during a turn, if they have a spell with full mana on their hand, they may pay this creature’s Ward cost. If they don’t, this creature gains Hexproof until end of the turn.”

"Professor Onyx is filled with great knowledge and power - especially power. Although often in contact with students, her words and teachings carry weight as if she always knows more than what she reveals. On other planes, however, this mysterious figure is known for being an infamous necromancer.” 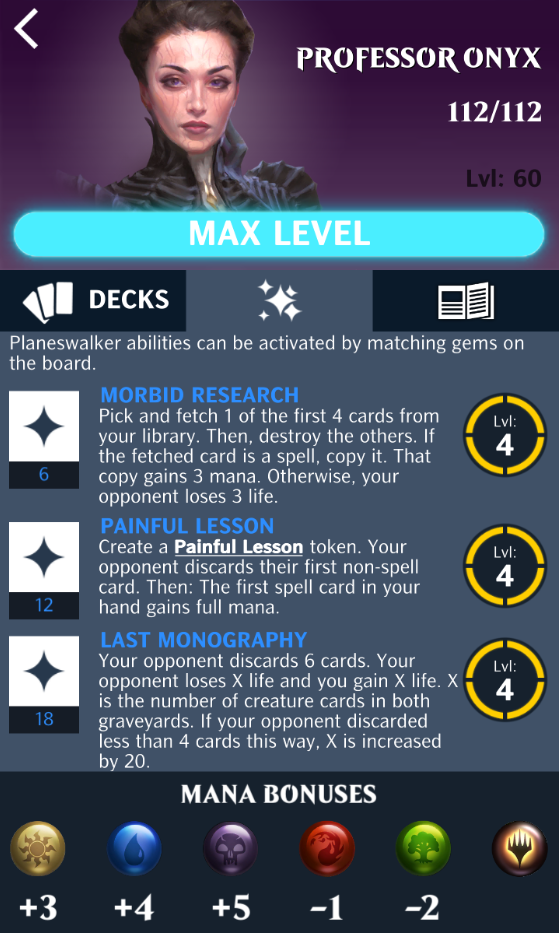 "Magecraft 3: Your opponent loses 2 life and you gain 2 life.

When your opponent casts or copies a Spell card: The first opposing creature with the greatest power gets -2/-2 and your opponent loses 2 life."

"First a member of the Coppercoats - then, an outcast. Now, Lukka is a Planeswalker with the ability to control monsters and bond with them. Powerful and dangerous, Lukka vowed that he would return home one day. But, for now, he is setting his journey with Mila - his crafty companion.” 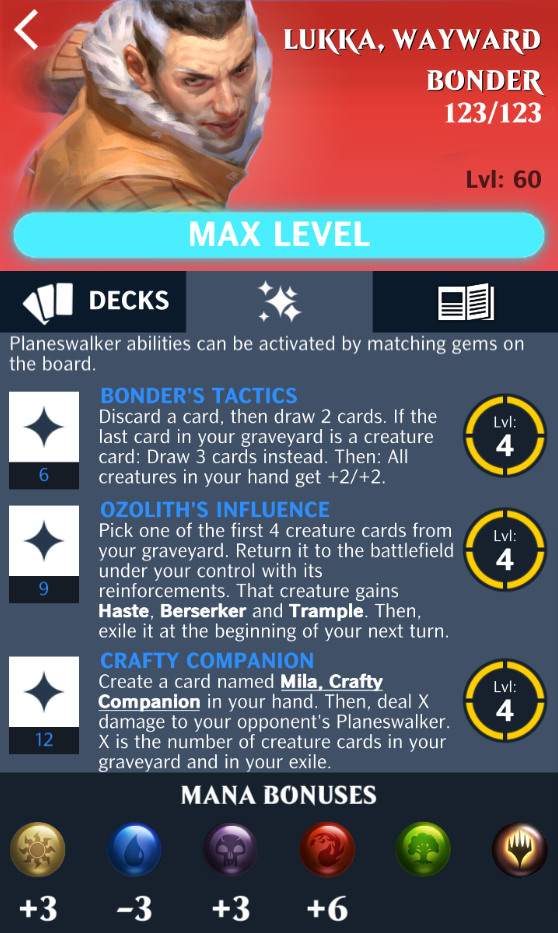 When the first opposing creature attacks: That creature gets -2/-0 and gains Berserker until end of turn.

When a nontoken creature you control becomes the target of a spell an opponent controls: Draw a card. It gains half of its mana.

"How would you feel if your mentor could easily transform you into a frog? Or if you’d heard that she had once used her magic to control an Eternal during an all-out battle? Well, that’s Kasmina - one and only. Her transmutation skills and control spells make her not only an amazing and powerful Planeswalker but also an astounding mentor to learn from!” 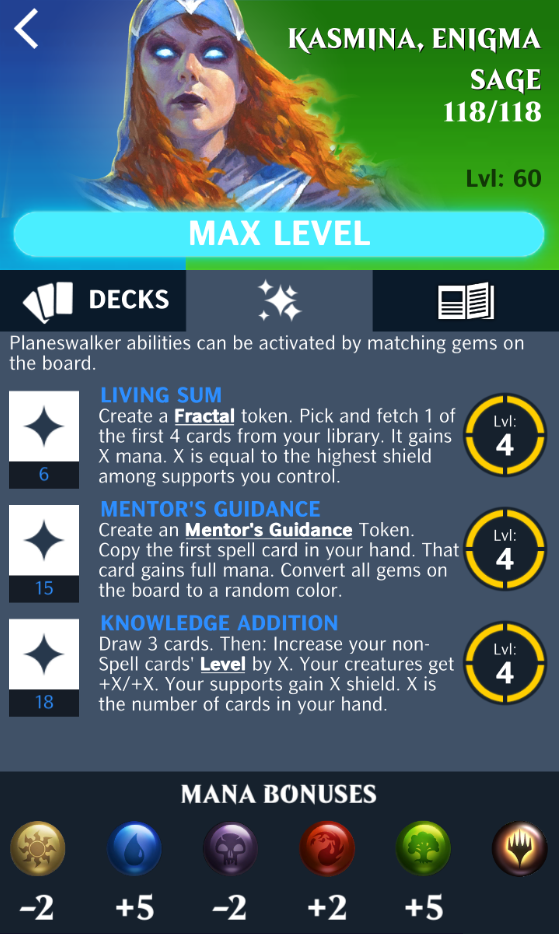 "Adamant - Red and White: At the end of your turn, Learn - Lorehold.

Adamant - Blue and Red: At the end of your turn,Learn - Prismari.

Adamant - Blue and Green: At the end of your turn, Learn - Quandrix.

Adamant - Black and White: At the end of your turn, Learn - Silverquill.

Adamant - Black and Green: At end of your turn, Learn - Witherbloom.

When you activate a Loyalty ability: Re-enable your Vanguard abilities."

"When this support loses shield for the first time on your turn: Reinforce it.

When this support is reinforced: Increase its Level by 1.

At the beginning of the combat on your turn: Your first creature gets +X/+X until end of turn. X is equal to this support’s Level."

Will and Rowan, Scholars of Frost and Sparks

"A natural fit in the Prismari College of Strixhaven, the twins Rowan and Will thrive on their contrast and synergy. While Will’s diligence and knowledge allows him to unfold many mysteries and find swift solutions to adversities, Rowan’s strength and power grants her the means to deal with any trouble that they might come across!” 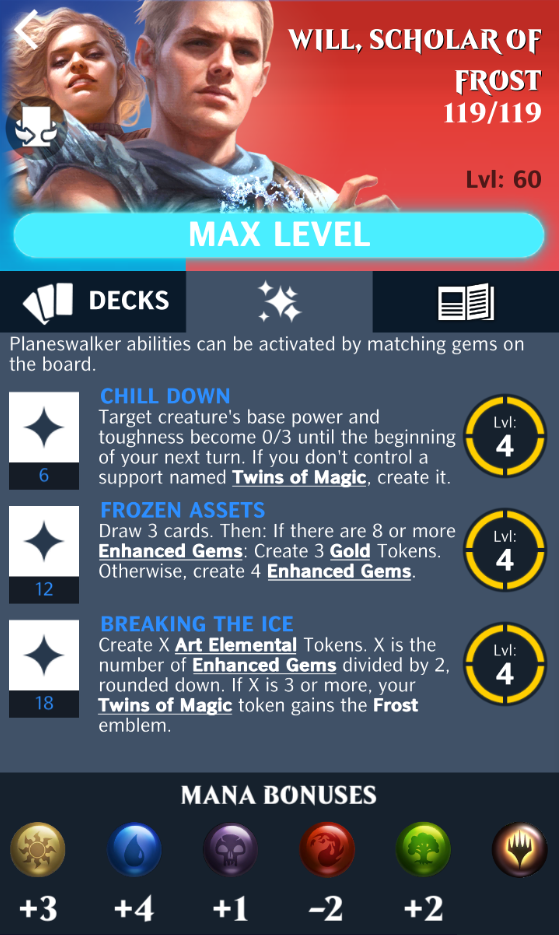 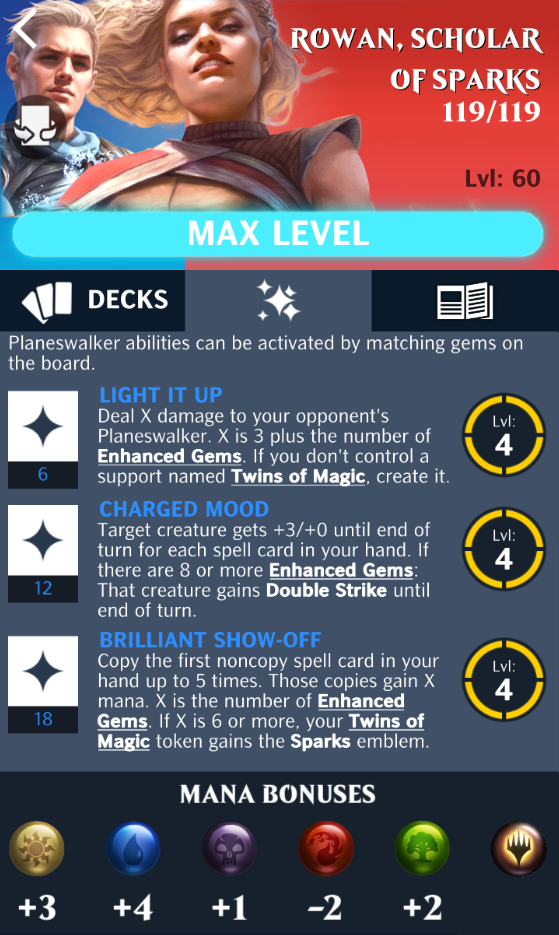 "When this support enters the board or when you activate a Loyalty ability: Each spell card in your hand gains 2 mana. You may Tag with your other Planeswalker.

Wizardry: Create up to 2 Enhanced Gems.

If this support has the Sparks emblem: Copy that card. It gains half of its mana.

If this support has the Frost emblem: Draw a card. It gains half of its mana."

"Jeska had the gift - or curse - of being reborn not just once, but three times. During each of her reborns, Jeska became a different being with a different name and unique abilities. However, after being slain as Karona, she came back to life a third time as Jeska - but, this time, as a Planeswalker.” 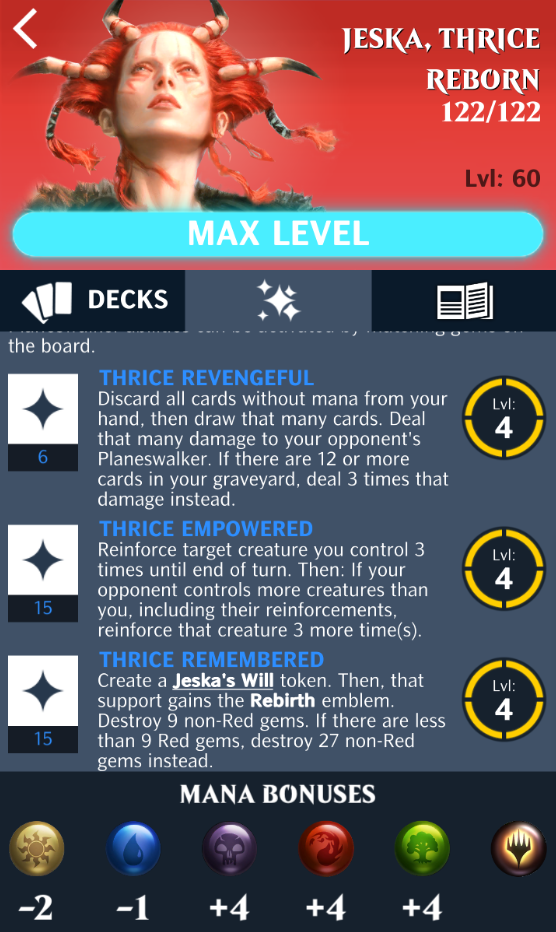 "When a spell card enters your graveyard from anywhere: If that card doesn’t have Buried, it gains Flashback and Buried X. X is that card’s base mana cost. Then, the first card with Flashback in your graveyard gains 3 mana.

When this support loses shield for the first time each turn: Fetch the first spell card from your library. That card gains X mana. X is the number of cards in your opponent’s hand."

If this support has the Rebirth emblem: That card gains X times 3 mana instead.” 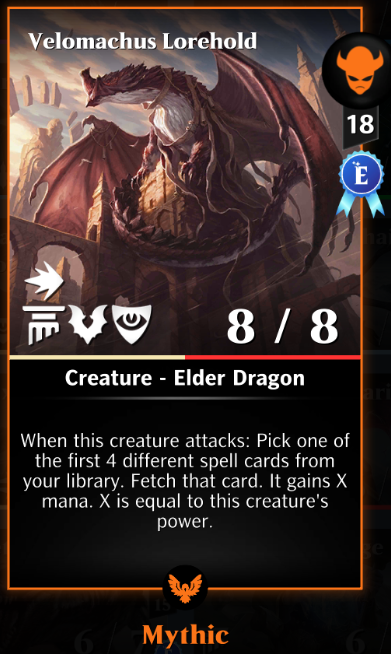