So. Players have had a few questions about things lately. What exactly is this teased targeted heroes feature? Is cereal a soup? Are feeders ever updating? Is Professor Xavier a jerk? You said there would be more UI updates, where are they? Let’s answer at least a couple of those today.

First of all, UI updates. The Character Info screen is getting a major overhaul and here’s a sneak peek! 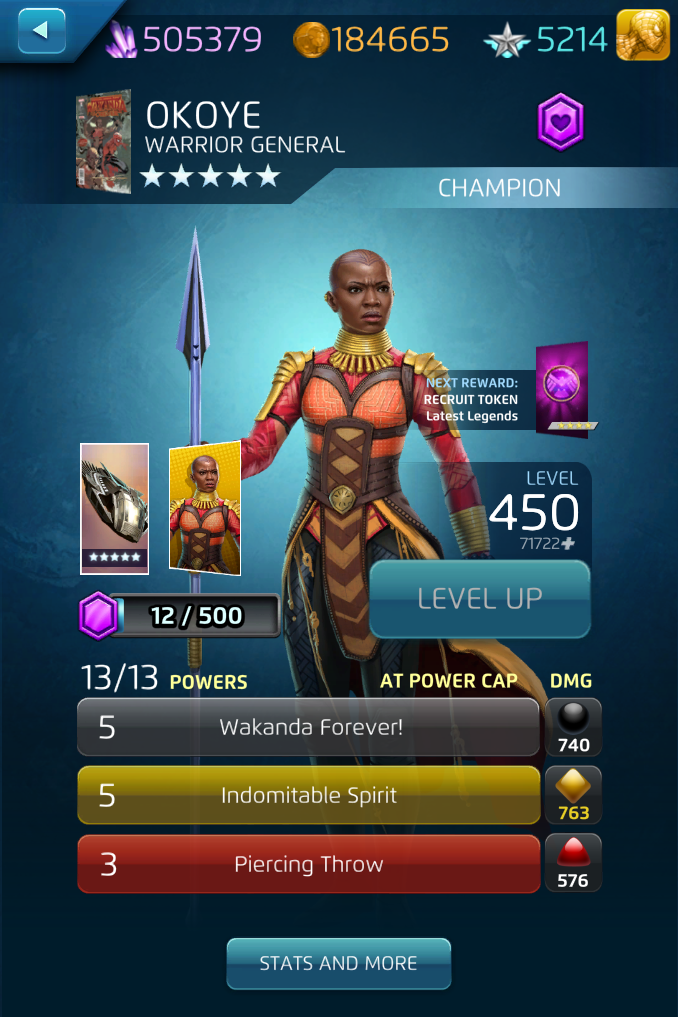 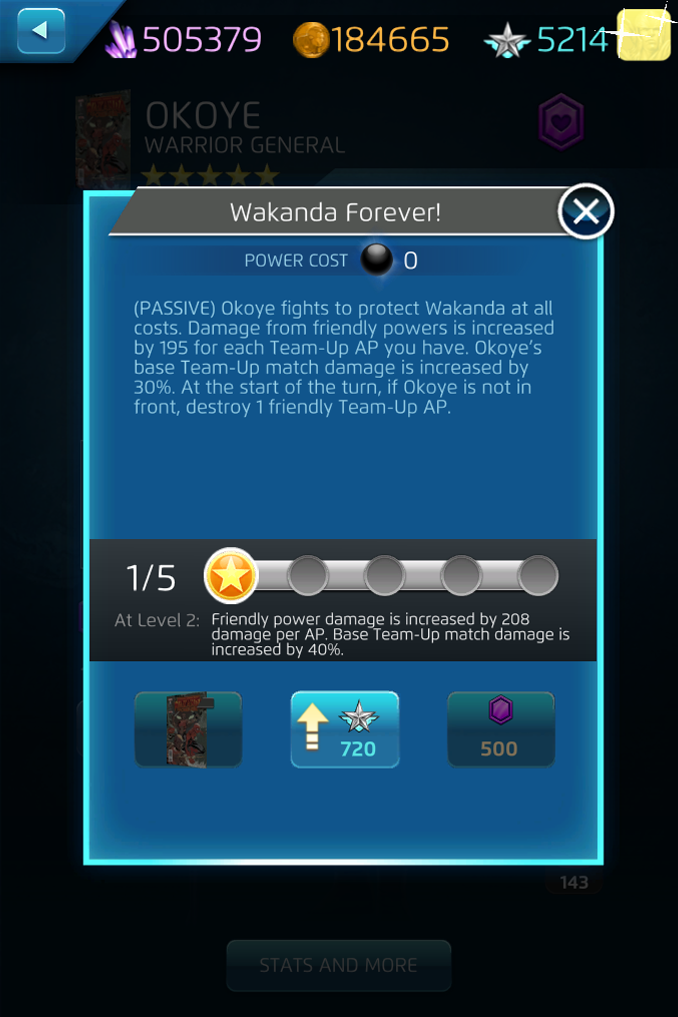 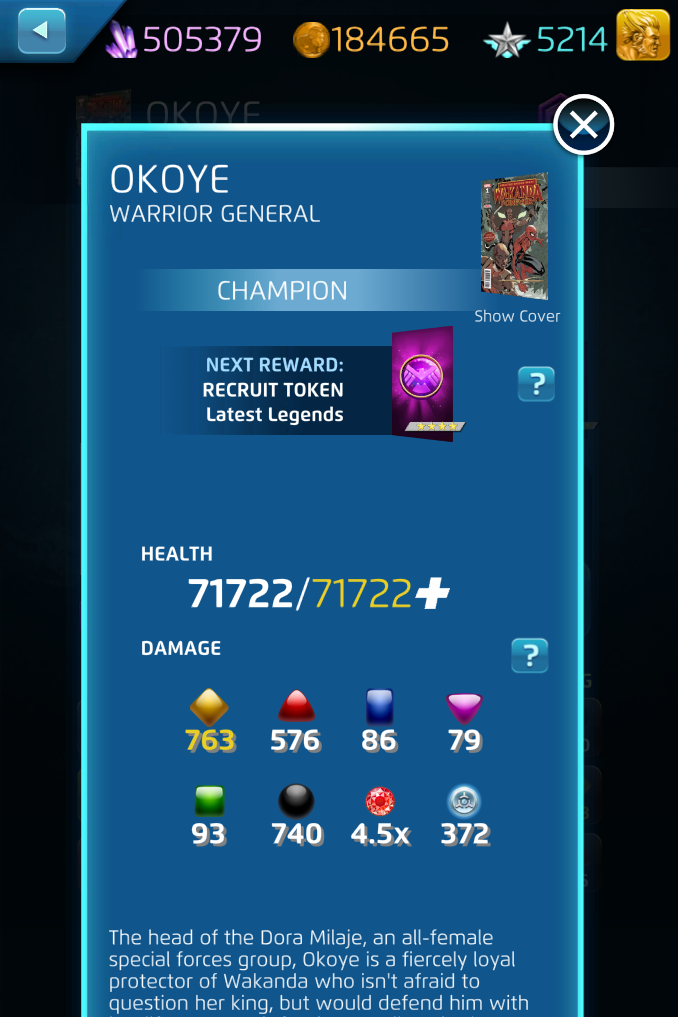 This sneak peek of the new Character Info screen shows off a more concentrated view on a single screen. With this more concise look, players don’t have multiple taps to move through multiple screens. Instead, every major piece of information is available right away with some other specifics just a single tap. This makes each character's info much easier to see, and it also makes costumes and supports much more accessible.

So, the eagle eyed among you may have noticed a couple of changes. For one, there’s a different “Favorites” icon in the upper right of the character info screen. It’s no longer just a heart! This icon still does the same thing, but is now separated more cleanly for each rarity so that it’s easier to see that the heroes are separate from one another.

A WILD METER HAS APPEARED!

This UI piece represents the other major update coming very soon, teased in a previous post. There’s been a lot of talk about what players think the feature is going to be, and we’re excited to show it off! Currently planned for R191 is the introduction of Shards. 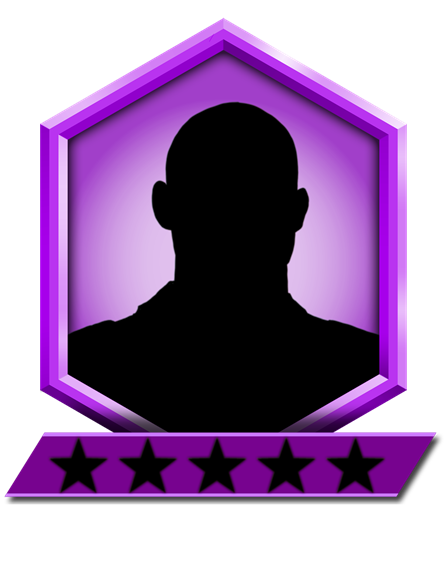 One of the things that players have been asking for is the ability to make targeted progress to their characters across the 3-star tier and up. Players also want the ability to work towards specific colors without waiting through 5 Saved Covers to convert. Since getting 4 and 5-star characters are relatively rare events, it means that character and roster power events come in large chunks. This system allows those chunks to still exist, but also allows for the ability for players to get smaller pieces of a character cover in a shot.

As part of the Shard feature launch, Favorite Heroes will replace Bonus Heroes. For those unaware, Bonus Heroes is the system where a player that pulls a 3, 4 or 5 star cover from a Cover Store pack has a small chance of also pulling a cover from a character that they’ve favorited. Bonus Heroes work well and give a great feeling when the player hits a Bonus Hero cover, but it can also be a bit of a downer if you haven’t seen one pop in a while. With Shards, you’ll continue to be able to work towards the heroes you have favorited, but also see exactly how far away you are from getting that next cover! .

When a player pulls from a pack, they gain a specific number of Bonus Shards (see table below) towards a cover for any heroes they have favorited. These Bonus Shards are gained regardless of what is pulled from the pack; standard tokens will give 6x 3-star Bonus Shards whether a 1-star, 2-star, or 3-star is pulled. For smaller pulls like the 1x or 10x pulls, these Shards will be gained for a single Favorited Hero in the given rarity. For 40x pulls you’ll receive batches of Shards spread across multiple characters in that rarity. If you have only one character in a rarity in a 40x pull, all Shards will apply to that one character. 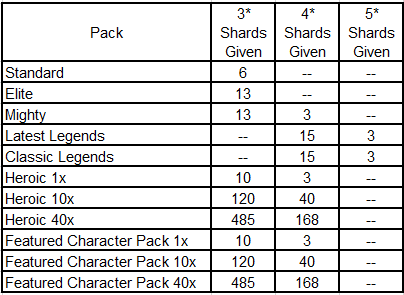 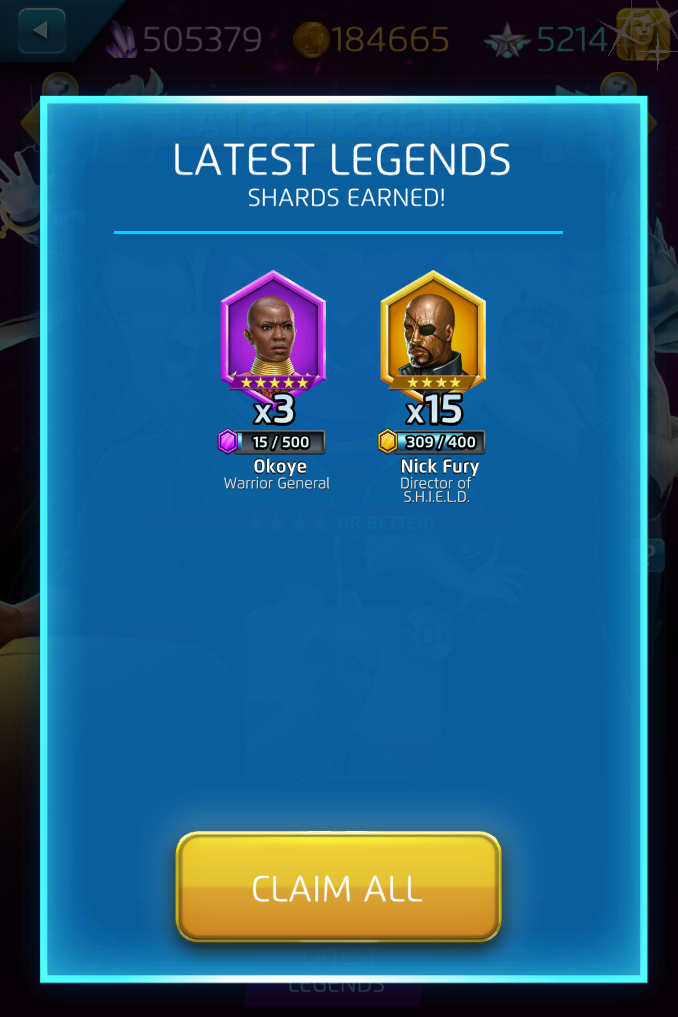 In this example pull, the player pulled a Latest Legends token and had Okoye and Nick Fury favorited. As a result, they gained 3x Shards for Okoye and 15x Shards for Nick Fury.

These numbers are great, but how many Shards do players need to gain a full cover through this system?

Overall, Shards will give out characters from Cover Store pulls about as often statistically as Bonus Heroes. However, with Shards, you get to see exactly where you are on the path to that character, and don’t have to worry about that Bonus Hero cover being unusable in your cover rewards and being auto-sold after some time. Shards stay around forever!

Once you have enough Shards, you can then use these to unlock a character if you don’t have them yet, or to level up a power in any color if you already do. 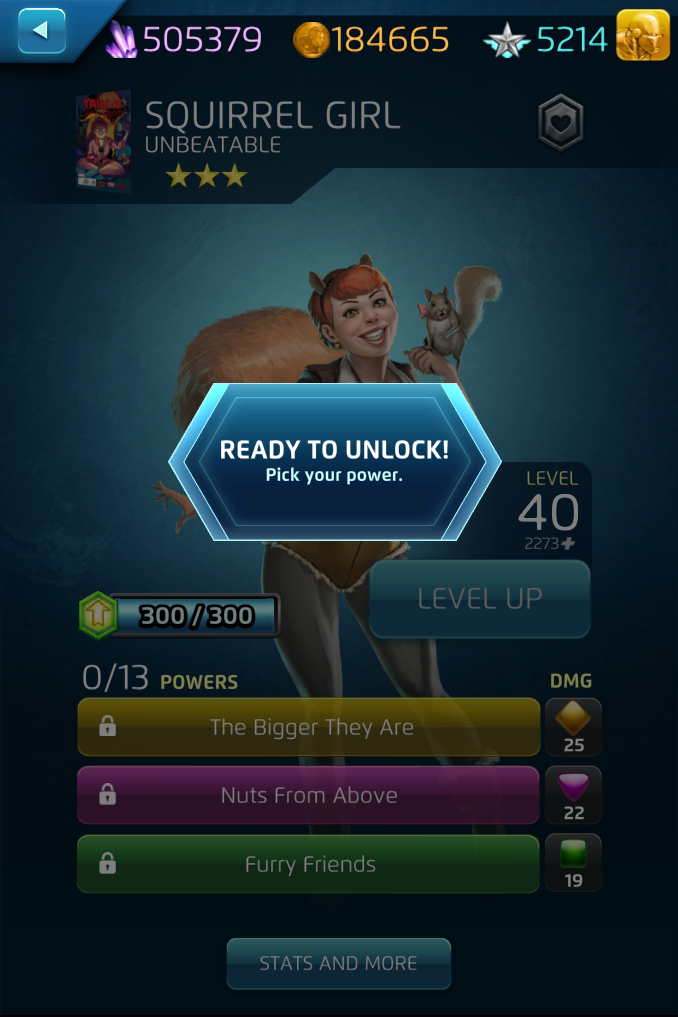 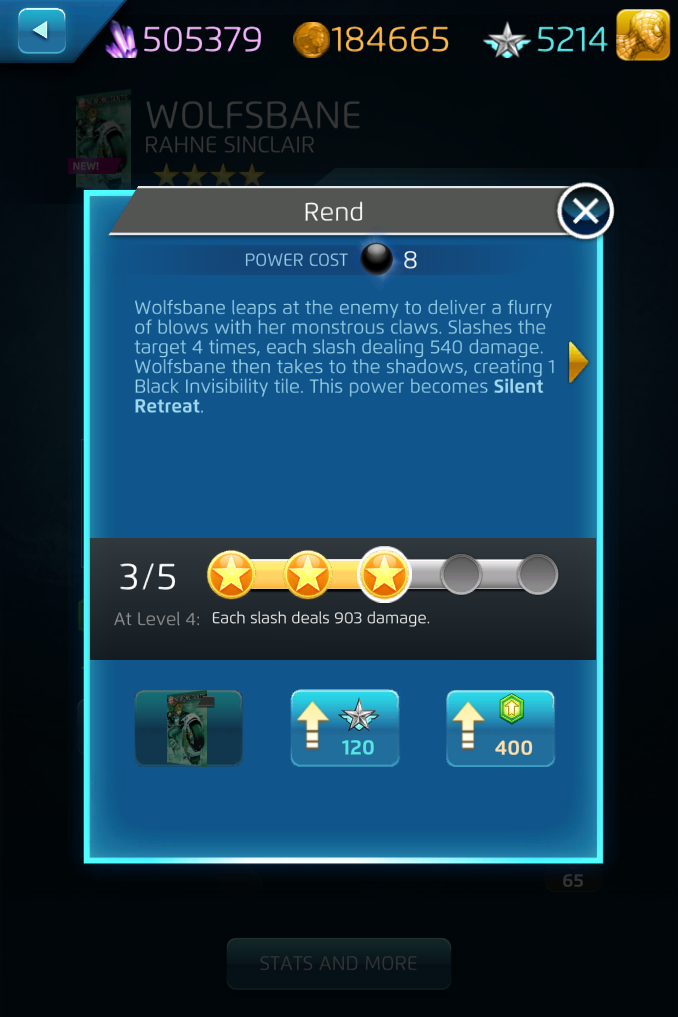 So in the first case, the player hasn’t yet unlocked Squirrel Girl, so the Shards let them pick a power and unlock her with 1 level in that power. In the second case, the player has enough Wolfsbane Shards to level a power, so that button is lit up. If they want, they can spend their 400 Shards to level up any power. In this case, looks like they’re about to level Wolfbane’s power, Rend! Note that this does not replace Saved Covers in regards to gaining new ability colors; You can use Saved Covers or Shards to level up specific ability colors.

How else can I get Shards?

Shards will be available in the Daily Shards Offers section of the Resources Store, found by tapping the gold icon in the upper right hand corner of your screen. 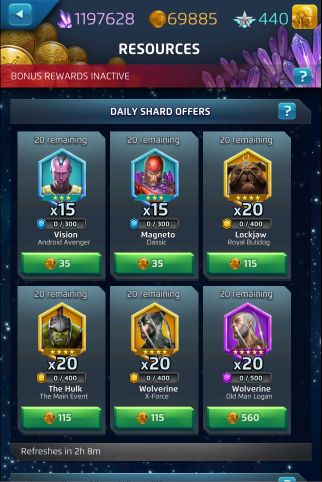 Note: Daily Timer timing and Shard Costs are not final

These Shards will be refreshed on a timer, and available for Hero Points. Multiple sets of Shards may be purchased, with costs increasing slightly each time a set is purchased. So if you’ve got a few extra HP to spare and see someone you want to pick up some Shards for, this is another way to grab some bonus shards for that character. Shard Stores are unique for each player, so check in on what you’ve got available, since your selection won’t match anyone else’s!

Past that, we will be updating several other places in the game to include Shards. Places like Event Rewards, S.H.I.E.L.D. Clearance Levels, Champion Rewards, and more will be seeing these additional ways to gain characters getting updates. We’re still finalizing a lot of these various rewards and we’ll be sharing that information with you as it comes on line.

So that’s the basics of the Shards. We’re really looking forward to players being able to dig into the systems and pull more characters!

Update on the Shard Shop with some more final numbers:

The shop will update twice a day, at 8AM and 8PM Eastern Time
The slots will refresh as pictured above - 1 5-star, 3 4-stars, 2 3-stars each time
Each slot will be purchaseable 20 times each reset at slightly increasing cost per reset (exact costs still being finalized)
Shards given per purchase will be 20x per 4 or 5-star slot, 15x for each 3-star slot

Meaning that if you see a Sabretooth in the shop one reset, you could spend the HP to purchase 20 sets of Shards at 20 Shards a piece for 400 total Shards, or one full cover.

I accidentally put 5 AM and 5 PM Eastern above when I was thinking Pacific. Shard resets are 8AM and 8PM Eastern, or 5AM and 5PM Pacific. Sorry about that!

Also, some of you have been wondering about initial Shard Shop costs. Those are as follows: 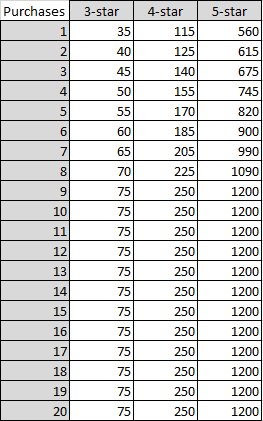 Updated the Shard per Pack chart with info on Shards gained from the upcoming Mighty Tokens.