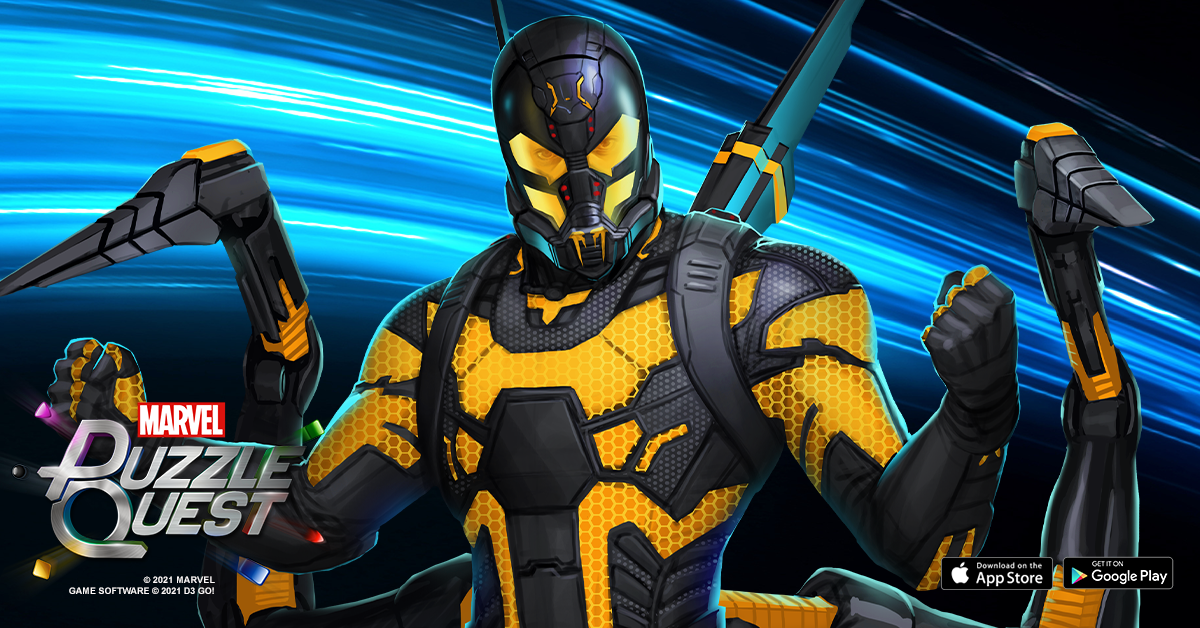 "After learning the science behind Hank Pym's astonishing shrinking suit, the ruthless tech mogul Darren Cross devoted his resources to creating a prototype suit with similar abilities. Cross envisioned this high-power cybernetic rig as a means to take modern warfare to a new level, personally overseeing its retrofitting and weaponization. Cross dons the imposing armor himself in hopes of achieving final victory as Yellowjacket!"
(Abilities listed at level 255, followed by 450)
15613 Health / 62754 Health

AP
Yellowjacket concentrates the Pym Particles in his suit to stabilize himself and prepare for his next attack. Restores 1029 health and the next time Yellowjacket fires a power, he also deals an extra 1668 damage. (Max level 4137 health, 6706 damage)
That Shrinking Feeling - 6

AP
Yellowjacket shrinks down to avoid enemy attacks while concentrating his own power! Yellowjacket goes invisible for 2 turns.

(PASSIVE) While invisible, Yellowjacket's powers ignore Protect tiles and his matches and powers deal 191 more damage. If Yellowjacket makes a Black, Blue, or Green match while Invisible, he stays Invisible for an extra turn. (Max level 769 damage) (Note: These extra turns work on any granted Invisibility, or his own, but if the Invisibility is granted because of a Countdown tile or some other board effect, Yellowjacket will not add extra turns to that CD tile or board effect.)
Sting Like A Bee - 8

AP
Yellowjacket sets his sights on the enemy, firing a series of energy blasts from his stingers. Fires 2 separate blasts of 977 damage. If Yellowjacket is Invisible, also destroy 3 enemy Strike, Protect, or Attack tiles. (Destroyed tiles do not deal damage or generate AP.) (Max level 2845 damage)