Oktagon_Support ADMINISTRATORS Posts: 2,514 Chairperson of the Boards
October 2020 edited September 2021 in MtGPQ General Discussion
(*Important note: Anything listed below is subject to change before release. We will try to update any changes in a timely manner, but please keep in mind the info below is not guaranteed.)

Join the Adventure and fight with the legendary Planeswalkers on Zendikar!

"Brilliant, curious, and always in control, Jace is a master of mental magic: spells of illusion, deception, and mind-reading.” 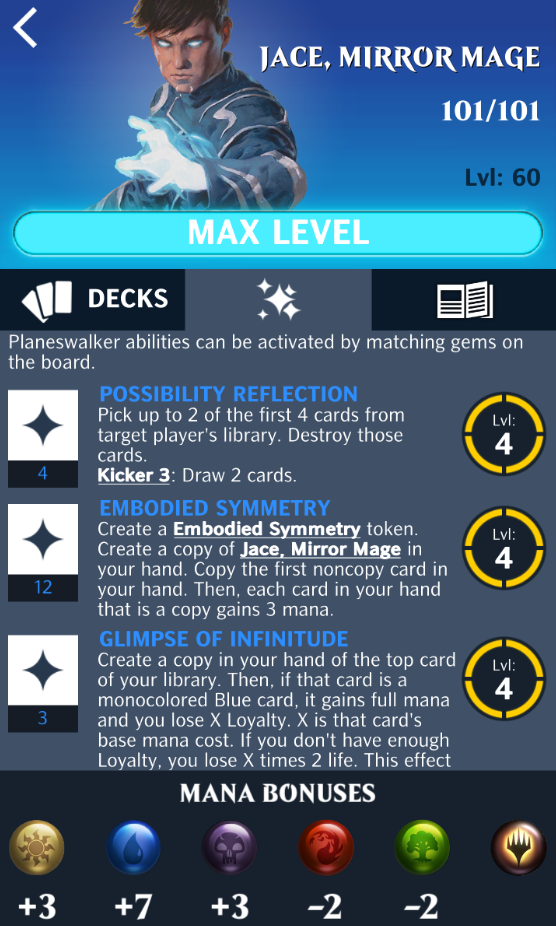 Embodied Symmetry
(Blue) Support Card - Emblem Human Wizard (3) Token
“Wizardry: Each card in your hand that is a copy gains 3 mana. When you drain mana from your hand: You may destroy the top 2 cards of target player’s library. Each of these effects can trigger up to 3 time(s) per turn.”

Jace, Mirror Mage
(Blue) Support Card - Vanguard Jace (3) Token, Vanguard, Legendary, Kicker
Passive Ability: This support can’t be reinforced.
“Kicker 7 - When you cast this card: Create a copy of Jace, Mirror Mage on the battlefield under your control.
+1: Pick one of the first 2 cards from your library. Fetch that card.
Neutral: Draw a card. If that card is not a Vanguard card, it gains full mana. That card is Disabled until the beginning of your next turn. This effect can’t give mana to Stored Mana. Then, this support loses X shield. X is that card’s base mana cost.”

Nahiri, Heir of the Ancients

"The kor Planeswalker Nahiri was a master of the stoneforge technique, using magic to coax exquisitely crafted weapons and tools fully formed from ordinary rock.” 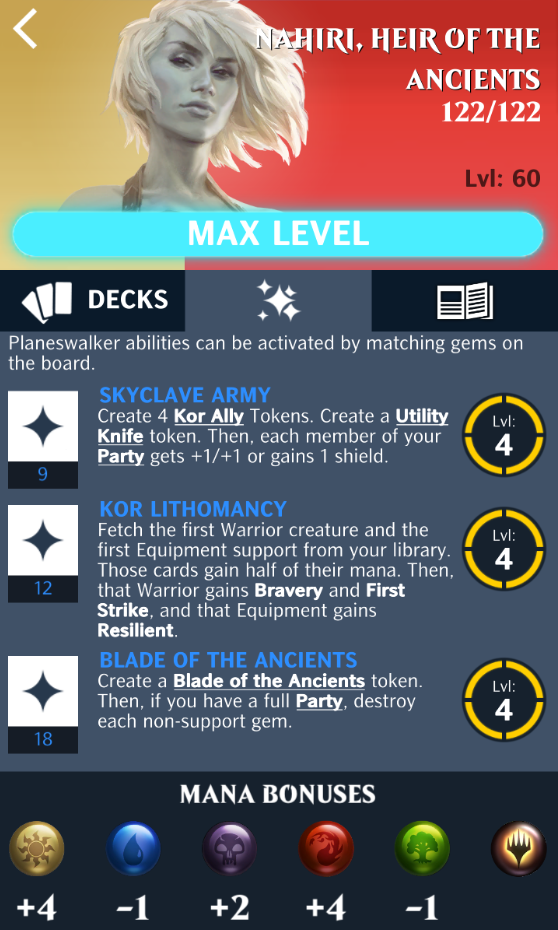 Blade of the Ancients
(Colorless) Support Card - Emblem Artifact Equipment (4) Token, Resilient
“At the beginning of the combat on your turn: Reinforce your first creature X times until end of turn. X is the number of other creatures and other creatures reinforcements you control.
When your first creature attacks: Deal Y damage to any opposing target. Y is the number of Equipment supports and Equipment support reinforcements you control.”

"Driven, devoted, and deeply connected to the land, Nissa Revane wields elemental magic. She's able to channel the mana leylines of a plane and to bring the land to life.” 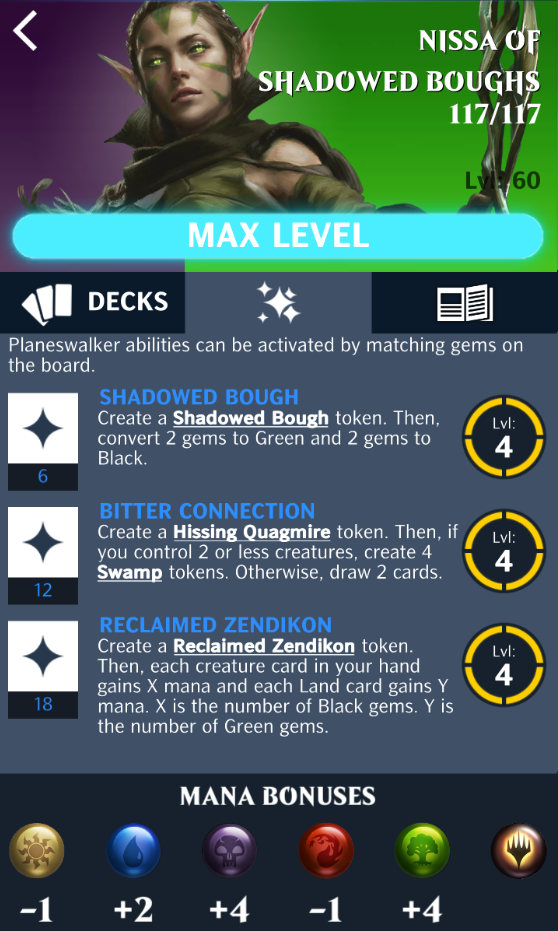 “Whenever a creature you control attacks, if this card is in your hand, this card gains the specified amount of mana.”

“This card has an additional effect if you cast it after making a horizontal match with a swap.”

“Your Party consists of up to one each of Cleric, Rogue, Warrior, and Wizard.”

“This ability triggers whenever you cast a spell or a Wizard card.”

“When you cast a card or activate an ability with Kicker, you may drain additional mana from your hand to trigger its Kicker effect.”

The confirmation prompt for these cards will refer to the Kicker ability.

"This creature is a Leader of the following Subtypes: <Subtype>".

(Each Category has its explanation when clicking on the INFO button.)