Who can make a good team with Angel/Archangel? 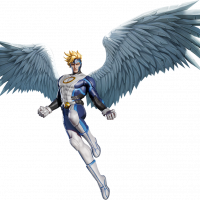 Daniel2121 Posts: 172 Tile Toppler
May 2021 in Roster and Level Help
So, (as I've said in another post elsewhere) I'm still fairly new, currently login day 35 in the game, as I'm typing this.

I've figured out some things, some by trial/error, some by doing my research. I'm aware that Angel/Archangel is/are kind of bad in this game. Or at least Archangel seems a niche hero (because of his blue passive that counters airborne enemies) but the 3* version aka Angel (that doesn't have the passive) seems kind of subpar. But regardless, I want this guy in my roster, because I'm a fanboy of the character, and though I'm still in 2*/3* land by now I intend to aim for Archangel, no matter how long it takes. Plus I've had already a few encounters with Vultures in both PvE and PvP and that guy is most definitely annoying and it doesn't seem like there's a way to stop Vulture once he gets going. So that helps me with the motivation for grinding Archangel shards too.

So, that's my question, what other heroes go well with him? Both the 3* and the 5* versions. Is the 3* Angel good with something like IM40 + Thor? I want to try that, but I have both IM40 and 3* Thor at low levels for now as I don't have all the ISO to put into them.

On a side note, I want also to look for other X-Men members to go with him, if possible.
0