Need some help on which 3*s to recruit. Detailed post. 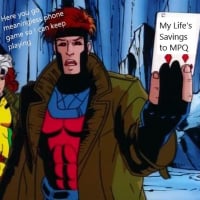 Hyzen Posts: 8 Just Dropped In
August 2019 in MPQ Tips and Guides
Just want to start off by saying I am missing out on some finger flicking around different colored circles and possibly 3 standard pulls involving 1* Spider-Mans from this 33 minute post. Relatively new player, but threw $19.99 for a Deadpool deal and 9.99 for a VIP. Currently at 30 roster spots, 5 open, but 12 different Rare character covers with about 6 to 12 days left in the covers. Let's assume I am working with 8 open spots for this post. Most importantly, need help on who to recruit. I know there are quite a few geniuses in here. From reading in forums and Reddit, I will just save all my Elite covers. Currently at 8. I assume no sense in just adding more rares, to have a 13 day ticker, to eventually just selling for iso-8, because no roster spots. Plus, right now, I don't want to run into an award of getting more rares without having the choice to recruit or sell while taking up a roster spot from a cover that is about to expire. I want to get this done. Definitely need some help.

I will list the covers I have in order of what I think will be best for building a collection. I also will attach my current day 15 roster in a link below. I have been averaging approximately 8 hours a day since being unemployed. Not to mention alliance hopping because I am placing high and leading in points, but only a quarter of these members on different alliances even participating. That is another story.

https://mpq.gamependium.com/rosters/Hyzen/
* Note: I understand I might have to eventually sell Elektra and Carnage 4*s. As well as 2 of my 1*s. Currently, they are viable for what I got.

Used the championed rewards link to figure a lot of this out: https://forums.d3go.com/discussion/37687/champion-rewards-by-character/p1

3*s to either recruit or sell: (let's pick 8):
Top of my list are potential covers that could be helped from 2* championed covers.

The rest I don't know if worth recruiting or selling. Maybe need the vet MPQ players here:

120 hours + $30 = Start saving covers if you want a good collection. Or else you are a screwed MPQ player. Because those covers that you sweated, accomplished, and earned will go straight to the purple things we named iso-8. Oh I get it, you are trying to have fun and play the game at a higher level, but no no no. You need roster spots opened before even thinking to any next steps. This is an expensive little game. Mwuhahaha. One that involves many days of gameplay. Years. Have fun new little minion gamer. - Love the f***** logic!

Maybe one of you suggest to just open those Elite Covers. See what you get and come back to this post. Maybe you guys/girls suggest on which ones to recruit and which ones to toss down the drain for 500 purple pieces of ****. Maybe one of you offer a crazy active alliance. I will take any advice or suggestions. I will also be actively checking other posts.

Thank you to whoever helps or reads this post.
~Hyzen