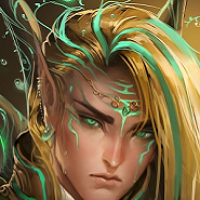 (0) Taskmasters iconic ability is second to none, making him a dangerous adversary in a fight. Whenever a enemy matches 3 black tiles while Taskmaster is in the front of the party he mimics their movements and performs the same attack right back at them causing equal damage and gains 1 black AP.

Show Me Your Moves!:

(10) Taskmaster mimicry skills are so keen at times he can even predict what his opponents are going to do next. When activated Taskmaster makes a yellow 1 turn countdown timer, while this timer is on the board any tile match made by the enemy will bring Taskmaster to the forefront and have the damage dealt by the match nulled, this include critical special tiles. However special abilities that trigger on a enemies critical match still trigger and take effect. Opponents still gain AP for the match.

I Can Do Better:

(16) Anything you can do physically he can do better. So long as it doesn't require super strength or speed Taskmaster can near instantly copy the move and in some cases do it even better if possible. This means after all his previous fights and observation Taskmaster knows a LOT of fighting moves and has contemplated numerous ways of applying them. Taskmaster deals 700 damage and destroys 3 random team-up tiles. Generates no Team AP. This damage ignores protect tiles.