Oktagon_Support ADMINISTRATORS Posts: 2,522 Chairperson of the Boards
February 2021 edited February 2021 in MtGPQ General Discussion
(*Important note: Anything listed below is subject to change before release. We will try to update any changes in a timely manner, but please keep in mind the info below is not guaranteed.)

New Collection: Kaldheim, has arrived!
Heavy battles are going to take place in Kaldheim.
Get your hands on over 240 new cards, 5 new Planeswalkers, 2 new events, and more! Now in Magic: Puzzle Quest!

"Tibalt should have been executed or jailed for life. Instead, he invoked a potent and hateful spell, from the devil's utterances and his own grim discoveries. The spell fused his own essence with theirs, at the cost of experiencing all the pain he had inflicted on others.” "As long as there is an opposing creature that was dealt damage: This creature gains Berserker."

"While on the board: Your token creatures and your copy creatures gain Haste.

When an opposing nontoken creature or Artifact support is exiled from anywhere: Create a copy of that card into play under your control. That card gains Enchanted - At the end of your turn: Destroy this card."

“Passive Ability: Herald 8: Valki, God of Lies. When you cast this card: You may exile it. Then, create a copy of this card under your opponent’s control.

Passive Ability: When you activate a Loyalty ability: Exile the first card without mana from your hand.

Passive Ability: When your first creature attacks: It gets +4/+0 until end of turn. Then, deal X damage to your Planeswalker. X is that creature’s power.”

"Tyvar is King Harald's younger brother, and he's lived most of his life in his brother's shadow. However, while a famous brother might inspire jealousy or resentment in some, Harald's example inspires Tyvar to seek glory and fuels an irrational confidence that he can accomplish almost anything he puts his mind to.” 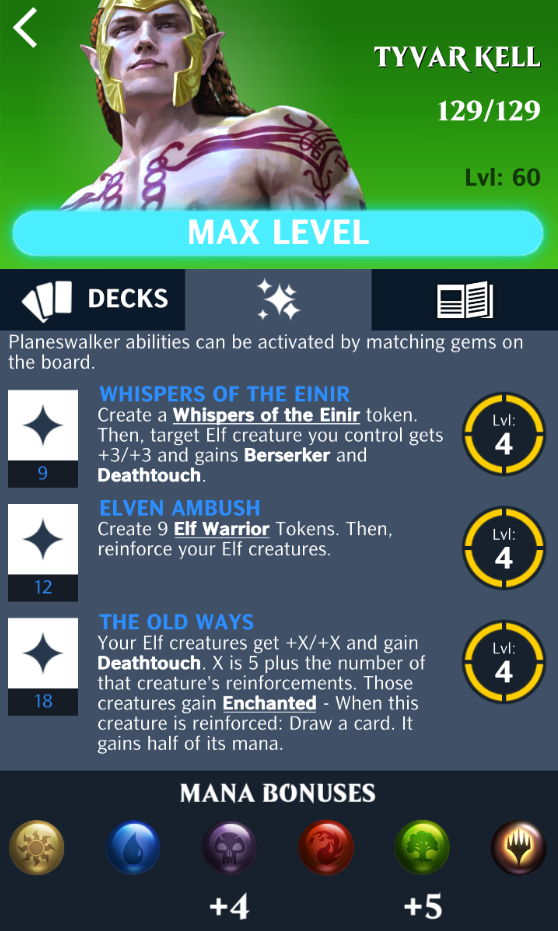 "When an Elf card enters into play under your control: Convert a gem to Green.

When an Elf creature you control dies: Convert a gem to Black.

Each of these effects can trigger up to 4 time(s) per turn."

"Kaya is a firm believer that life is for the living. The living should make the most of their lives and pursue what they want while they've still got time, and find their own peace before death. If you die with unfinished business, well, that's probably your fault. And if it's not...perhaps she could help you...for a price.” 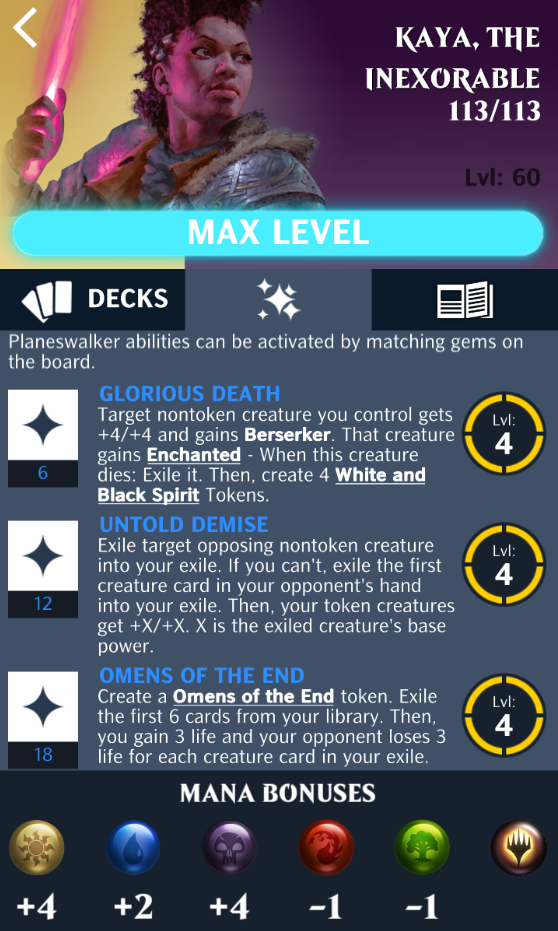 Omens of the End

"When you cast your second card each turn: The first card in your hand that gain mana gains full mana. Then, if you control a Legendary card, repeat this effect."

"Early in Niko's life, an oracle foresaw a great future for Niko: they were destined to be a great athlete, an undefeated javelineer who would never miss a shot. Niko trained and competed for many years, but in all that time, they heard stories and songs of heroes who would fight to protect people and began to question the destiny prescribed to them.” 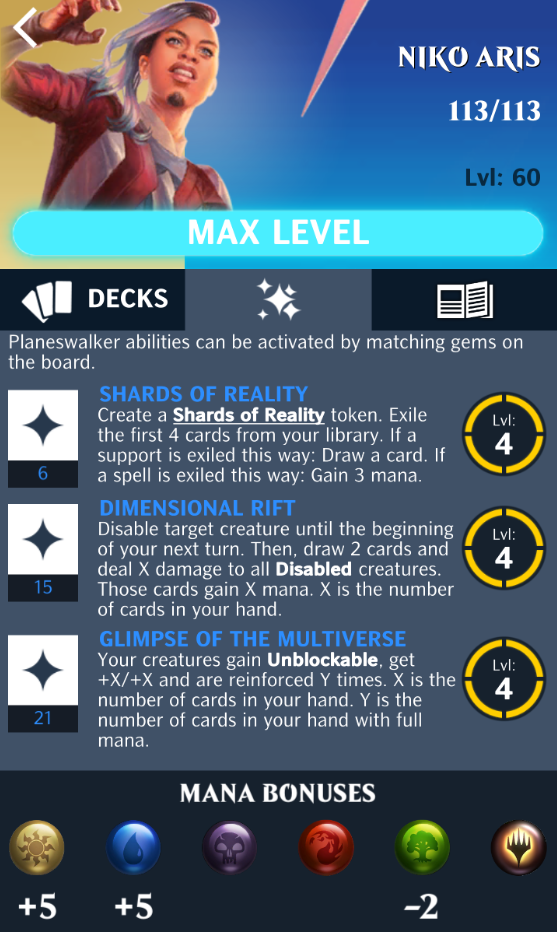 "When a support is destroyed from play: Draw a card. It gains X mana. X is the number of this support’s reinforcements."

"A human Planeswalker from the distant past, Serra was a powerful and benevolent healer. She created an artificial plane known as Serra's Realm, where she and her followers lived in peace defended by flights of angels. Though Serra and her realm are long gone, her legacy and teachings have lived on as a beacon of hope throughout the Multiverse.” 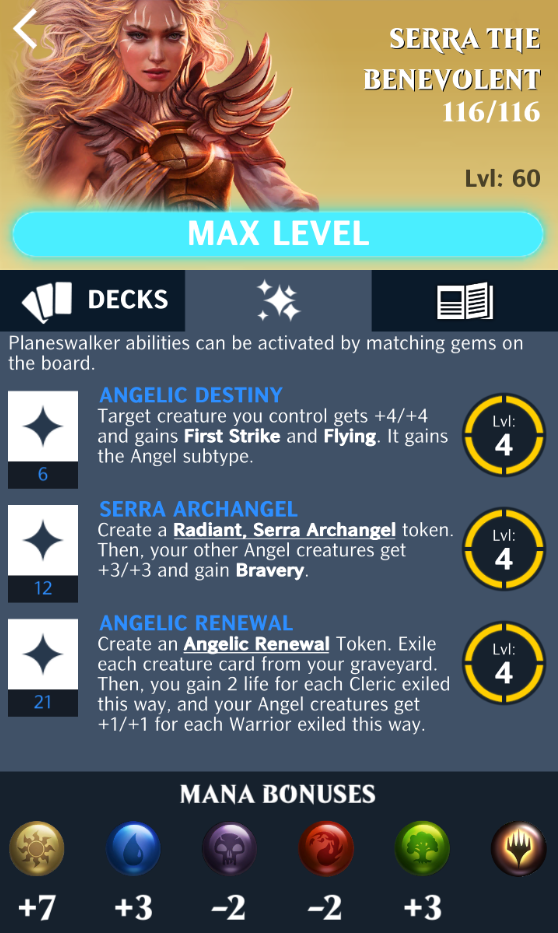 “When a nontoken creature you control dies: You may exile it.

When a creature card is exiled from your graveyard: Create a Vigilant Angel token.

When you Foretell a card from your hand: Create a Vigilant Angel token.”

When an Angel creature you control attacks: This creature gets +2/+2 and gains Protection from your opponent’s Planeswalker colors until the beginning of your next turn.”

“Match {0} or more {Color} gems with swaps during a single fight.”

“Match {0} or more gems of your Planeswalker colors with swaps during a single fight.”

“Match {0} or more gems of your Planeswalker colors during a single fight.”