Mickleberry Age Unconfirmed Posts: 48 Just Dropped In
June 2017 in MtGPQ General Discussion
Before I begin, I'd like to thank everyone who has been reading and giving me incredibly useful and constructive feedback on this... thing that I post. I'm going to start making these shorter and more focused, and reference where I can. I'll also be adding more visual things to break up walls of text, so while this may seem like a physically "longer" post, it should have significantly fewer words.

Again, thanks for the feedback: it's always welcome.

Hibernum didn't call me for an interview :-( ... oh well: no time to be sad; IT'S SPOILER SEASON!

For me, spoiler season is like the NFL Draft happening once every two or three months. I am affixed to the the computer/phone screen to see what new cards have been revealed to the public shortly before their official debut. I love the discovery of new keywords, new planeswalkers, new... everything. It's that lovely rush of hype that gets me ever excited about opening packs of the next set, hoping to pull the cards I've been waiting for since the moment I first saw them in the spoilers.

As these spoilers have slowly been trickling onto various websites, I couldn't help but think what these cards would look like in MTGPQ.

On the forums, you can already see speculation of what Smut will look like - This one started by @Blorbleflorp

So instead of more talk about the GR planeswalker, Let's go over a few of the other cards and cycles in the upcoming set... 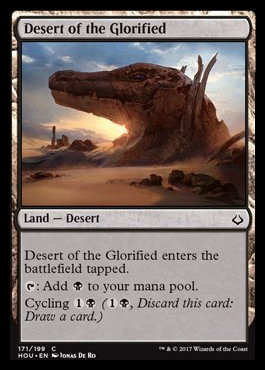 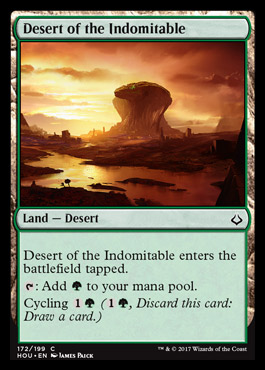 First off... this is AMAZING artwork. The image alone has an ominous storytelling factor to it: the chills you get when you realize that Planechase's "Talon Gates" are the remains of a powerful leviathan that Nicol Bolas ate. (reference - here )

In PQ, these desert lands might give players more opportunities for cycling cards and converting gems to their color in all five colors.. and at common, too! What I would like to see is something like this:


Desert of the Glorified (4)
Black - Common
Support
At the beginning of your turn, convert 1 gem to black.
Cycling 4


The reason I put it down as costing 4 is because it seemed fair. If Painted Bluffs (common) costs 5 to convert one, Corrupted Grafstone (rare) costs 7 to convert two, and Chrome Mox (masterpiece) costs 9 to convert 3, it makes sense in my mind to stay consistent with this design pattern.The cycling costing 4 is for one reason and one reason alone: New Persepctives. 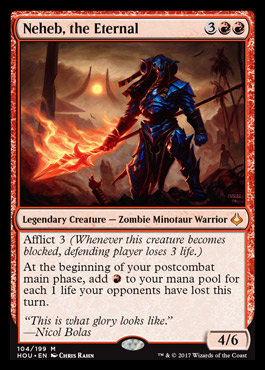 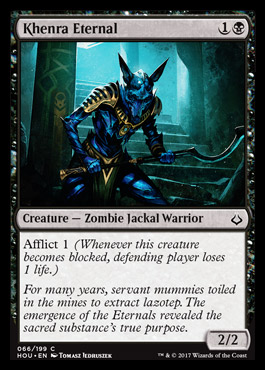 Afflict should be pretty easy to translate into MTGPQ. Perhaps add a little extra damage to compensate for the requirement of Defender/Reach to block creatures and for higher starting life totals, and change any creatures that reference postcombat main phases and "when this creature isn't blocked" to "when this creature deals damage to a planeswalker...." For example:

For sake of simplicity, I worded afflict to "deal damage" instead of causing life loss.

As tempting as it was to give Neheb "destroy that many non-red gems", I decided against it fearing that a standard Koth build would run away with it in any relevant event. Besides, a Beatstick with an "anti Cryptolithic Rite" attached to it seemed like it would be interesting and fun. It would also mean giving creatures Trample would be really interesting, allowing you to destroy up to 6 non-red gems in a turn (provided each of your creatures have trample and afflict, each of your opponents creatures have defender or reach and are killed with excess damage to go through) 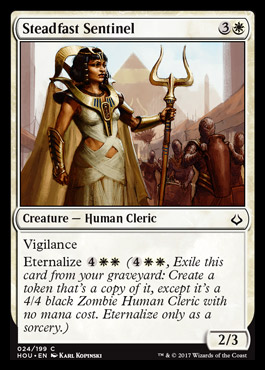 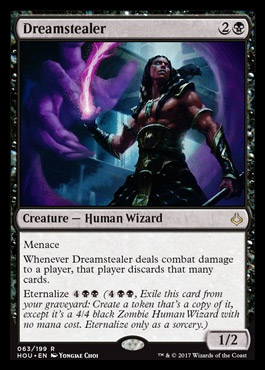 I'm assuming that Eternialize will be as similar to Embalm in MTGPQ as it appears to be in paper Magic. It's basically embalm, except that instead of a white token that has the same stats, it's a black token with a 4/4 body. Such as...

Steadfast Sentinel (11)
White - Common
Creature - Human Cleric
Vigilance
Eternalize 1. (While this creature is in the graveyard, place X activated gems on the board, where X is the amount listed next to the keyword. When you match one of it's activated gems, this creature is removed from the game and a token copy of this creature is created, except it's 4/4, black and has an additional Zombie subtype.)
2/3

For the same reason as I gave for Neheb, I felt like nerfing Dreamstealer's ability to just one card would still be pretty impactful. It would also mean that you can make this a less costly rare.

While I feel that Embalm is a bit clunky in a game that limits the number of creatures you can have on the battlefield, it makes sense from a design and aesthetics standpoint to utilize the artwork that paper magic has for the embalmed tokens. That being said, if they wanted to try something different...

VERSION OUTSIDE THE BOX

Steadfast Sentinel (11)
White - Common
Creature - Human Cleric
Vigilance
Eternalize 1. (While this creature is in the graveyard, place X activated gems on the board, where X is the amount listed next to the keyword. When you match one of it's activated gems, this creature is removed from the game and 2 2/2 black Zombie tokens are created and gain all abilities of the creature removed from the game, except this one.)
2/3

This would allow for an Eternalize-centric deck to create a giant Zombie with a million abilities. Imagine with just the two eternalize creatures in the picture above making an 8/8 black Zombie with Vigilance and Menace that makes your opponent discard when it swings!

Also, it would help prevent the battlefield from getting muddled up, while offering a more "high risk, high reward" alternative to the embalm mechanic from the previous set, as destroying this one creature would undo the "eternalizing" of all your creatures. If utilizing the artwork is a concern, a simple solution would be to use that artwork for the activated gems, to further help differentiate the two mechanics.

While I have many more ideas on what these cards could look like... I'll wait for not-so-distant future posts to share ideas for more specific cards.

In the meantime, what do YOU want these mechanics to do in Magic the Gathering Puzzle Quest?

Peace, Love and Extra Swaps to all,
Mick (a.k.a. "Mickleberry")