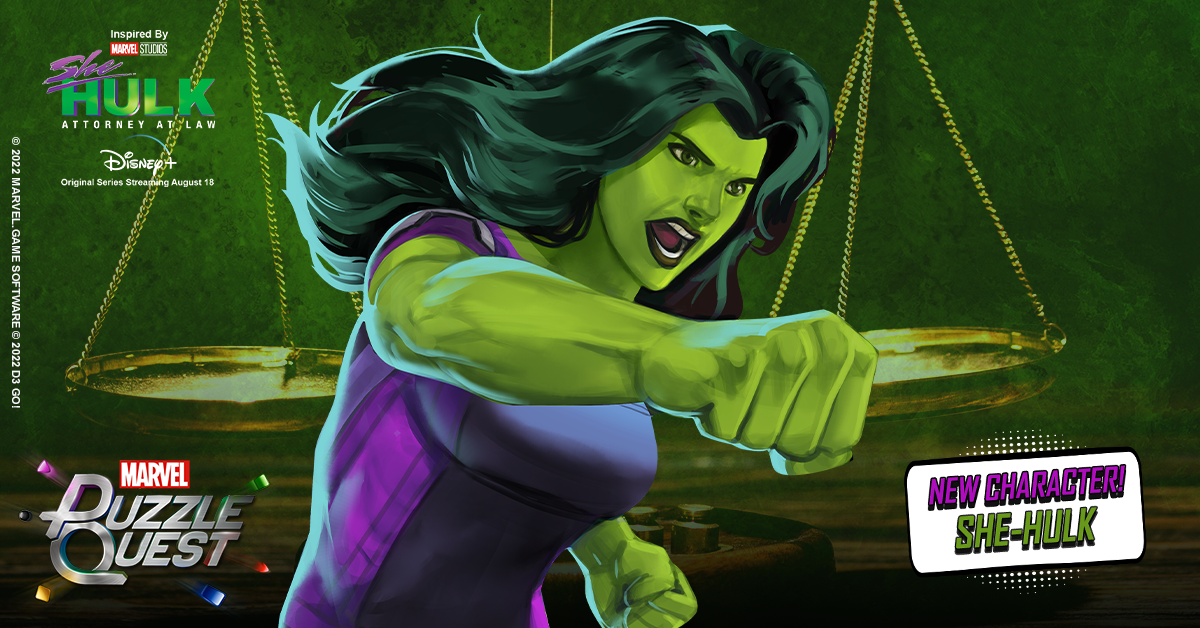 "Jennifer Walters, a former prosecutor at the District Attorney's office, suddenly gains Hulk-like powers after an accident exposed her to the gamma-radiated blood of her cousin, Bruce Banner. Now as She-Hulk, she leads the Super Hero division of the law firm GLK&H. She must take on a variety of clients, including Emil Blonsky, aka Abomination, all while navigating life as a woman in her thirties who has been thrust into the spotlight."

AP
You make a strong argument, but mine's stronger. She-Hulk leaps into a full-force punch dealing 486 damage and sending her target flying through any unfortunate walls behind them; for every Protect tile on the board up to 2, destroy those tiles and deal 116 damage per tile; all damage ignores Protect tiles. (Prioritizes enemy tiles). (Destroyed tiles do not deal damage or generate AP). (Max level 947/226 damage)
Heroic Defense - 8

AP
Look, you know what it means. I have to speak to the terms of today. I'm not proud of this. She-Hulk flings a piece of rubble from the current battle. Deals 500 damage to the enemy and 150 damage to the enemy team, both increased by 9% for every Red AP over 9, consuming the additional AP. You wouldn't like Jen when she's angry. (Max level 974/292 damage)

Rewards tokens to the The Hulk vault

Rewards tokens to the The Hulk vault

- We'll be giving out a free cover of She-Hulk (Origin) to celebrate her release! This gift will go out soon after her normal release timing.
- She-Hulk (Origin) will *not* initially feed anyone with Champion rewards. She *will* however, be feeding the next 5-Star release and will be updated soon after that character's release. There will *not* be retroactive rewards for this changeover, so if you're planning on waiting for rewards before you push her levels, we'd recommend using the Saved Cover system till she updates.
- She-Hulk (Origin) will *not* be entering pack rotation at the end of this Versus season, while Spider-Man (Oscorp) will be as normal. This is because She-Hulk will still be in the middle of her new release events. She will enter pack with the end of the next Versus season.
- Not *directly* related to She-Hulk (Origin), but She-Hulk in general: Additional daily tokens for the "Holding Court" Vault are available starting TODAY (8/16) through 8/21 for playing with the following characters: She-Hulk (Modern), Black Widow (Any), Medusa, Scarlet Witch (Any), Storm (Any), Hellcat, Spider-Woman, Invisible Woman, Valkyrie.
Tagged:
0