NEW Collection available: Streets of New Capenna!
Get your hands on over 240 new cards, 4 new Planeswalkers, 1 new event and more!

“When an opposing source would make this card take damage, be destroyed or lose shield, prevent that damage, destruction or shield loss. Then, reduce this card’s Shield Counter value by 1. If it can't, it loses Shield Counter. When this card gains Shield Counter, the value is added to its current value.”

“When another creature comes into play under your control or this creature is Reinforced, Perform the following effect(s).”

Alliance is an icon evergreen that represents a trigger in Magic: Puzzle Quest. Each card has its own effects to be triggered with alliance.

“When you cast this creature, you may have it lose Blitz. If you don't, this creature gains Haste and Imminent Death. When this creature dies or loses a reinforcement, if it has Blitz, draw a card.  That card gains mana equal to this card's Blitz value”

In Magic: Puzzle Quest, Blitz comes as an evergreen icon that allows players to decide to remove from a card on casting. If they don’t, the card will lose reinforcements until it becomes destroyed. When it does, players draw a card and gain some mana back for that.

“When you cast this card, you may destroy target creature you control with power equal to or greater than this card’s Casualty value. If you do, Create a copy of this card into your hand. Then, It gains full mana and loses Casualty.”

Casualty is a mechanic with an icon evergreen that allows players to sacrifice a creature in order to create a copy of the card with casualty with full mana on their hand while casting.

“When this card Connives, discard the last card from your hand and draw a card. Then, if the last card in your graveyard is not a support card, this creature gets +1/+1.”

Connive is a creature ability with an icon evergreen that allows players to discard a card and draw a card when activated. Then, if the discarded card is not a support card, the creature that connived gets buffed.

“When this card enters play, Pick one of the  first 4 cards from the top of your Library. Exile that card. Then, that card gains Hidden.”

“This card is returned to your hand with full mana once a card with Hideaway‘s conditions are matched.”

In Magic Puzzle Quest, Hideaway allows players to pick a card to be exiled and marked to cast later with an evergreen called Hidden. When a card with Hideaway’s condition gets fulfilled, the card with Hidden goes to the player’s hand with full mana.

Elspeth meets her home plane in order to get hints of how the plane managed to defeat a phyrexian invasion in the past. Wielding a halo infused weapon, she is ready to fight at the conflicts that show up in the present while trying to dig up the past. 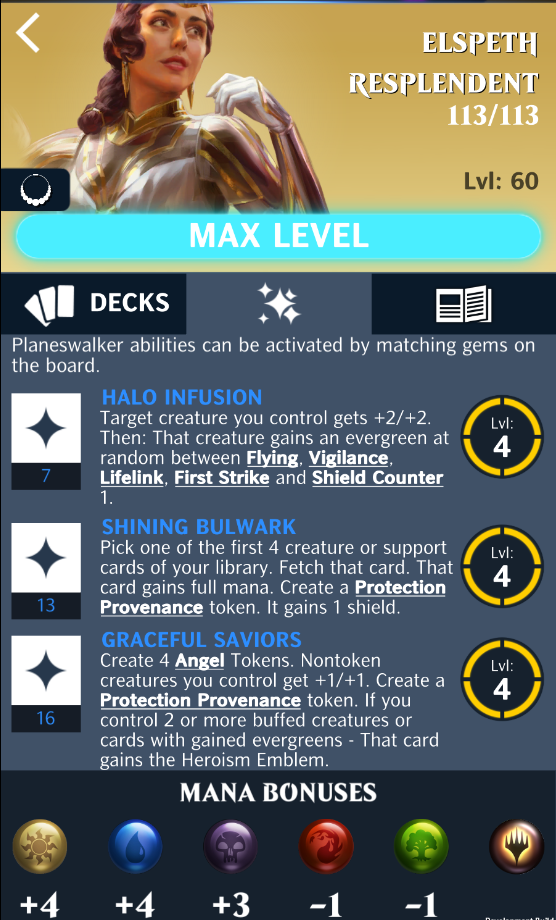 Passive Ability
Resplendent Blessings
When a card you control gets buffed or gains an evergreen: A random support you control gains 1 shield. This effect can trigger only once per turn.

Vivien on the Hunt

Always trying to preserve nature around the planes she visits, Vivien Reid finds at New Capenna a new adventure field. She gets infiltrated into the families’ business in order to find information about Elspeth, who might be needing some help. 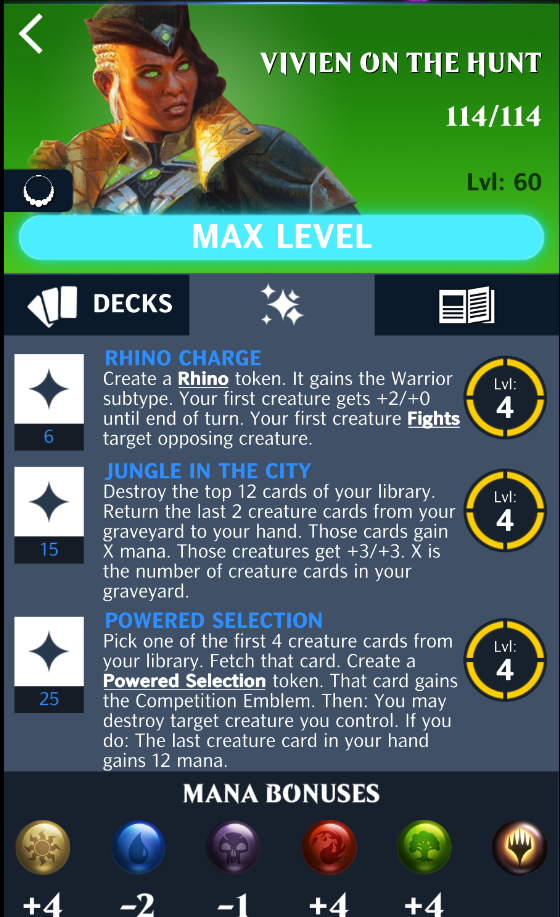 Passive Ability
Predator’s Trail
When a creature you control dies: The first creature card in your hand without mana gains X mana. X is the base power of the destroyed creature. This effect can trigger only once per turn.

In pursuit of power, Ob Nixilis gets in contact with the demons that have control over New Capenna. With an intent of getting control of the plane, he attempts to attack all families, but Elspeth and Vivien get in his way 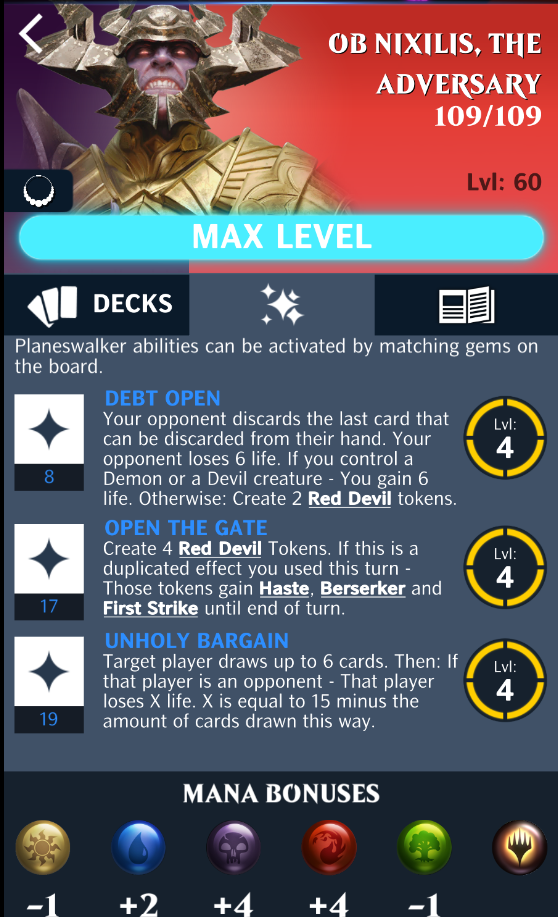 Passive Ability
Casual Call
When you activate a Loyalty ability: You may pay 6 Loyalty. If you do: Duplicate that ability’s effect. You cannot choose new targets for that duplicated ability

The original forger of the Blackblade, Dakkon became a planeswalker, as promised by Geyadrone Dihada, after completing the creation of that powerful weapon. But his creation was used to split apart his soul from body, leaving him to planeswalk bound by the Blackblade. 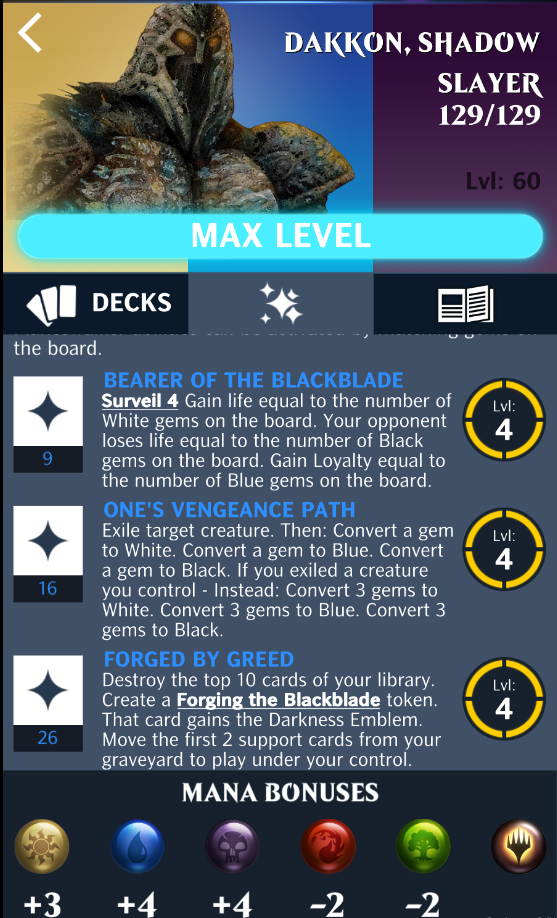 Tokens
Forging the Blackblade
(White, Blue, Black) Support Card (4) Token
“At the beginning of the combat on your turn: Your first creature gets +1/+1 for each White, Blue and Black gem on the board until the end of turn. Then: If this support has the Darkness Emblem - Opposing creatures get -X/-X until end of turn. X is the greatest number among White, Blue or Black gems on the board."

Each node allows a specific variety of Planeswalker colors, being for Obscura Infiltrators White, Blue and Black, while Cabaretti Greetings allows White, Green and Red Planeswalkers

The Standard Booster reward in the Nodes of Power and Battle from the Ages events now includes cards from Streets of New Capenna (SNC). The Booster contains duplicable cards.