Some suggestions for game play and units 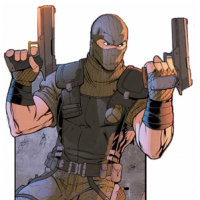 Dragoon74 Posts: 1 Just Dropped In
March 2021 in GI Joe Suggestions
Apologies, as this is a bit long, but here were some thoughts that I came up with on new battles and units for this game
Yo Joe!

2.         For Sea Battles have submarines. GI Joe ideas are the S.H.A.R.C. and, for Cobra, the BUGG.  Could also add divers for sea battles: Torpedo, Deep-Six, Wet-suit (Joes) and Eels (Cobra). Also could have the Cobra Battle Barge for Sea Battles. Use the Terror Drome base for Cobra instead of the Tactical Battle Platform.  Could also have the Terror Drome as the Cobra base for special ops battles.

4.         Introduce the GI Joe APC or Warthog AIFV.  Either vehicle could have the capability to deploy Steel Battalion Troops during the battle. Another Joe vehicle idea is the Bridge Layer: it could lay its bridge over minefields and/or barricades to allow Joe vehicles and troops to bypass these types of defences. Somewhat similar, but Tripwire could be a new Joe soldier that deactivates mines during a battle.

5.         An Anti-aircraft gun as a defensive unit.  Best part is that the gun could also be employed against ground targets, unlike the Anti-air missiles.  Cobra has the ASP and the Joes have the FLAK or the Whirlwind

6.         VTOL jets that operate like the helicopters in the game in that they can hover. Cobra has the Rattler and the Joes have the Sky Hawk or the Tiger Rat (the captured Rattler used by GI Joe’s Tiger Force).

7.         Comms specialists: Joes could have Breaker or Dial-Tone and Cobra the Tele-Vipers.  These specialists could call in air strikes or artillery.

8.         Similar, but computer specialist: Mainframe for the Joes and Techno-Viper for Cobra. Both could hack enemy defences.

9.         Toxic warfare specialists: Air Tight for the Joes and Toxo-Vipers for Cobra. Their gas could cause major damage to troops that deploy from barracks. Gas could either have no effect, or very limited effect on vehicles.