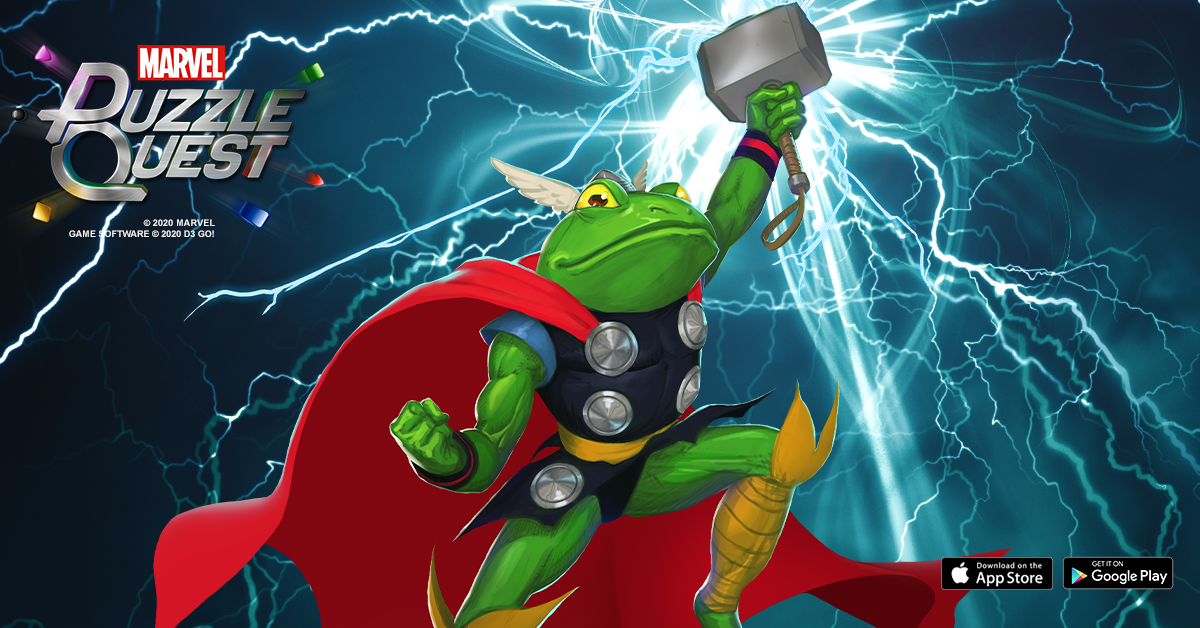 "Simon Walterson was once a promising young athlete when tragedy struck his family. After turning to the occult for guidance, he was cursed into a frog by a fortuneteller. Left to fend for himself on the streets of New York, he eventually ran into Thor, Wielding a sliver of the mighty Mjolnir, Simon now fights for justice as Throg, Frog of Thunder."  (Abilities listed at level 70, followed by 270)

AP
Throg rallies Lockjaw and the Pet Avengers into action! Grants the team a burst of 463 health and sends them Airborne for 2 turns.

(PASSIVE) When an ally returns from being Airborne, destroy all Charged tiles in their strongest color, dealing 611 damage per tile destroyed. This power costs 1 AP less for each color of Charged tile on the board (to a minimum of 3; destroyed tiles do not deal damage or generate AP.) (Max level 902 health, 1191 damage)
Zip Zap Zop - 8

AP
Throg summons a lightning storm to zap his opponents and charge the battlefield! Deals 324 damage and converts 4 random basic or enemy Strike, Protect, or Attack tiles to Charged tiles. If an enemy tile is converted this way, Throg fires this power again at no cost until no enemy tiles are converted. (Max level 631 damage)
A Hop, Skip and a Jump -

PASSIVE
(PASSIVE) Throg leaps around the battlefield with ease, deftly dodging enemy attacks. Whenever you make a Blue match, he creates a 1-turn Blue Repeater tile that generates a random Charged tile. If Throg would take damage, the damage is negated and a Repeater tile is removed.