Nick Fury requested a new training program for S.H.I.E.L.D. After some tinkering with the Stark-Tech training simulator, we are excited to show you what the new program looks like for new recruits to MPQ! Starting with the inimitable Hellcat, S.H.I.E.L.D. Training is coming back in a new format, but will be familiar to anyone used to the old style of the event. Without any further ado, It’s Pats… Welcome to S.H.I.E.L.D.! 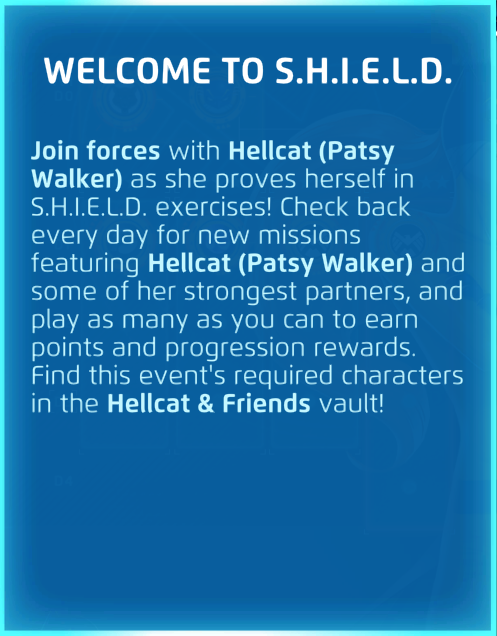 With Welcome to S.H.I.E.L.D., missions unlock daily like an Advent or Daily Unlock event, not all at once. Over the course of five days, you’ll get to experience increasingly difficult challenges for the character, paired with increasing rewards! As in the previous S.H.I.E.L.D.Training, beating the earlier missions in the columns is required to continue down that column. The 1v1 and Row 1 missions are automatically unlocked on the first day. 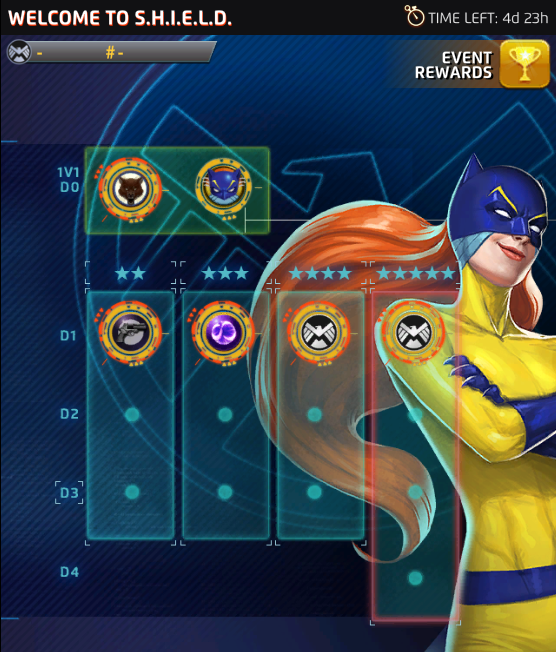 The rarity of each column is listed at the top. To the left, the day that the mission unlocks is listed. For those interested, here’s what each row entails.

Rewards will be given out through individual mission rewards as well as from overall progression in the event. Completing each mission will grant you Iso-8, Heroic Tokens, Release Vault tokens, and Command Points. The final mission will reward a Latest Legends token for those that manage to beat it. Progression-wise, players will get Iso-8, Release Vault tokens, and even Shards for the new character being featured.

We hope that the new Welcome to S.H.I.E.L.D. event will be more accessible to more players and that players of all roster strengths can get meaningful progress out of it. Once you’ve had a chance to run through the all-new Welcome To S.H.I.E.L.D., we’d appreciate your feedback, no matter what the strength of your roster may be!