Getting Into A Battle

Getting Into A Battle

So you want to be the best of the best, eh? Well be sure to check out this guide then, because there are some things you'll want to know before getting into a fight, and knowing is half the battle! 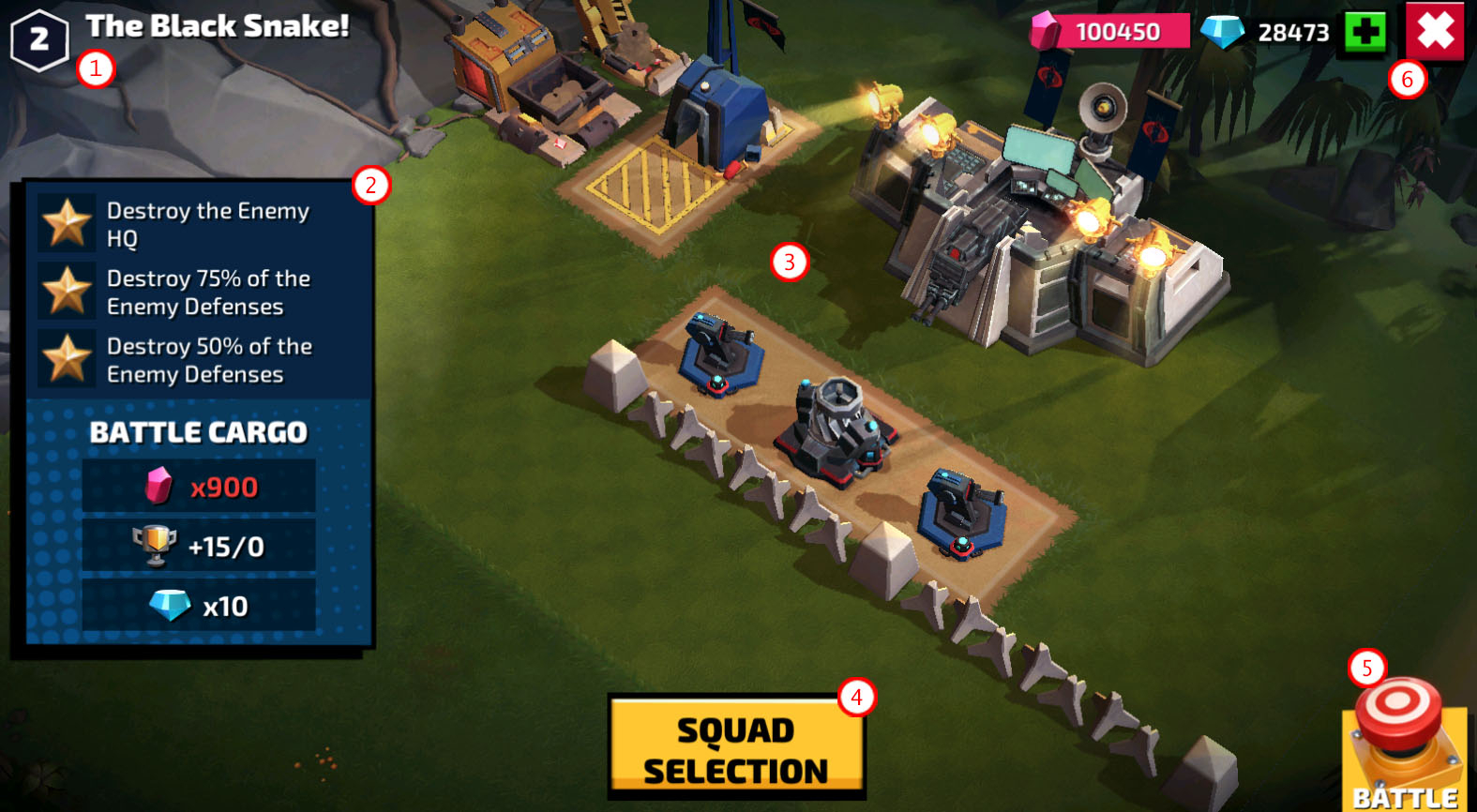 2. Objectives / Rewards
Each battle has a max number of 3 Stars that players can achieve. Each star is acquired by accomplishing the listed objectives. Alongside the objectives are the rewards you'll earn for successfully winning the battle.

3. Enemy Base
Here is where you can see and analyze your opponent's base. Understanding the layout and figuring out how to approach the situation is the key to victory. Knowing how to attack your opponent's base will enable you to make effective squad selections pre-battle, and utilize strategic tactics during battle.

For example, we can see that there are 2 Turrets powered by a single Power Generator. Since we know there is a finite range that Turrets can attack enemies in, it might be advantageous to select Long Range units that can attack from afar, in order to avoid being hit by 2 Turrets at the same time.

In addition, you can click on enemy buildings to see detailed information, such as how much Health it has, how many Action Points destroying it will grant you, and (if it's a damage-dealing building) how much Damage it deals. 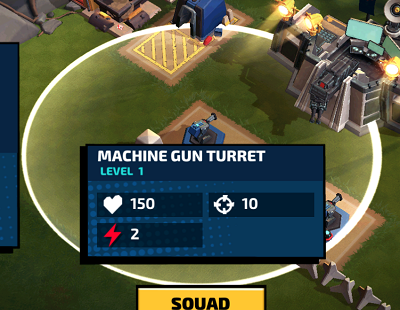 4. Squad Selection
This is where you choose the Units you want to bring with you into battle. At the beginning, you will have a limited number of slots to choose Units, however as you level up, more and more slots will become unlocked. After unlocking them all, you will have a maximum number of 9 slots available to equip a Leader, 5 Heroes / Troops / Vehicles, and 3 Commands.

Every squad needs their one and only Leader, and what better than a Hero to lead? When a Hero is chosen as a Leader, you gain access to their special Leader Abilities.

The majority of your squad will be made up of a variety of Heroes, Troops, and / or Vehicles. You can choose any combination of those 3 Unit types to equip to those slots.

Please note that if you choose a Hero for this slot, you will NOT have access to that Hero's Leader Abilities. Only a Hero in the Leader slot will have those enabled.

Commands are powerful, single-use abilities that can target any area on the battlefield. You can bring 3 of them into a battle at a time, and once they're used up, they'll need to be recharged with Minerals in order to be used in another battle.

5. Battle Button
Once you've chosen your Hero, Troops, Vehicles, and Commands, then you're ready to fight!

6. Leave Battle
Don't feel like battling this enemy anymore? No problem! Simply leave the battle, and you'll be taken back to the Map screen; no repercussions. 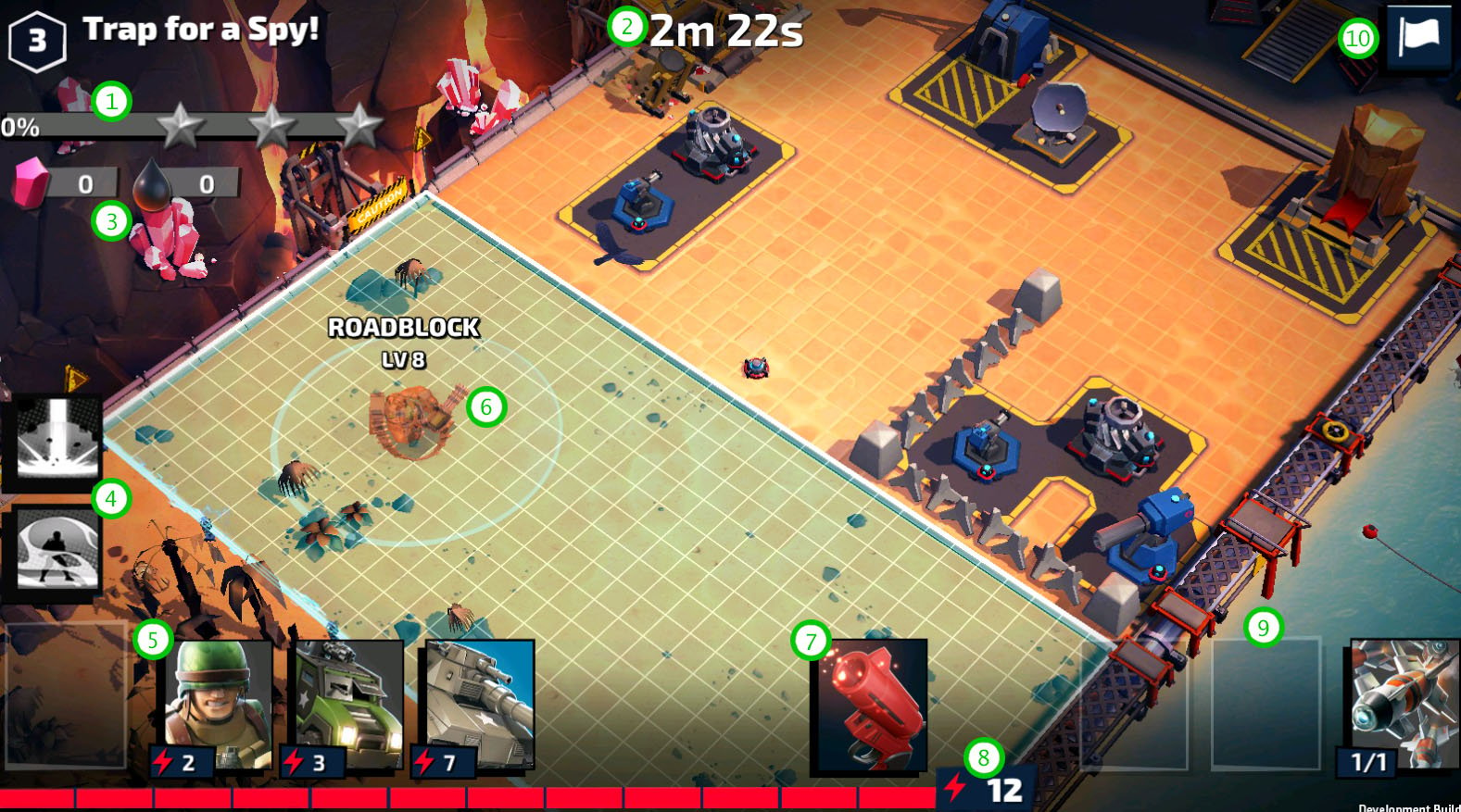 1. Star Rating
This is where you can keep track of how many stars you've earned during your battle.

2. Timer
You only have a limited amount of time to defeat your enemy, so act swiftly!

3. Acquired Resources
Destroying enemy buildings will give you resources. This is where you can keep track of how much you've acquired already.

4. Leader Abilities
Any Leader Abilities you have available at your disposal will be displayed here. After using an ability, it will go on a brief cooldown before you're able to use it again. This ability does not cost you anything to activate.

5. Leader, Troops, and Vehicles
These are the Units you chose to be a part of your Squad during the Pre-Battle screen. Each Unit has a value at the bottom-left corner of their icon. This is how many Action Points are required to deploy them onto the battlefield, and deploying them will consume Action Points from the meter below.

To deploy a Unit, simply hold down the icon, drag to where you want to deploy them in the deployable area, and let go. Once a Unit has been deployed, that same action of holding their icon and dragging will now order them to perform either a movement or an attack on an enemy.

6. Deployable Area
At the beginning of the game, there will be a portion of the map that's available for you to deploy your Units. The more enemy buildings you destroy though, the larger this deployable area becomes.

8. Action Points
In order to deploy your Units, you're going to need enough Action Points (AP). This is where you can keep track of the number of AP you have at any moment. The maximum amount of AP you can store is 12. Consumed AP does not regenerate, and the only way to acquire more is by destroying enemy buildings.

9. Commands
Just like your Units and the Move / Attack Order, tapping and dragging will allow you to perform the Command. Unlike Heroes, Troops, and Vehicles though, these are one-time uses, and you'll need to recharge them after the battle is over.

They are powerful abilities that don't cost Action Points, so use them wisely!

10. End Battle
Changed your mind about fighting this enemy? Not to worry. Just click on the flag, then select End Battle. 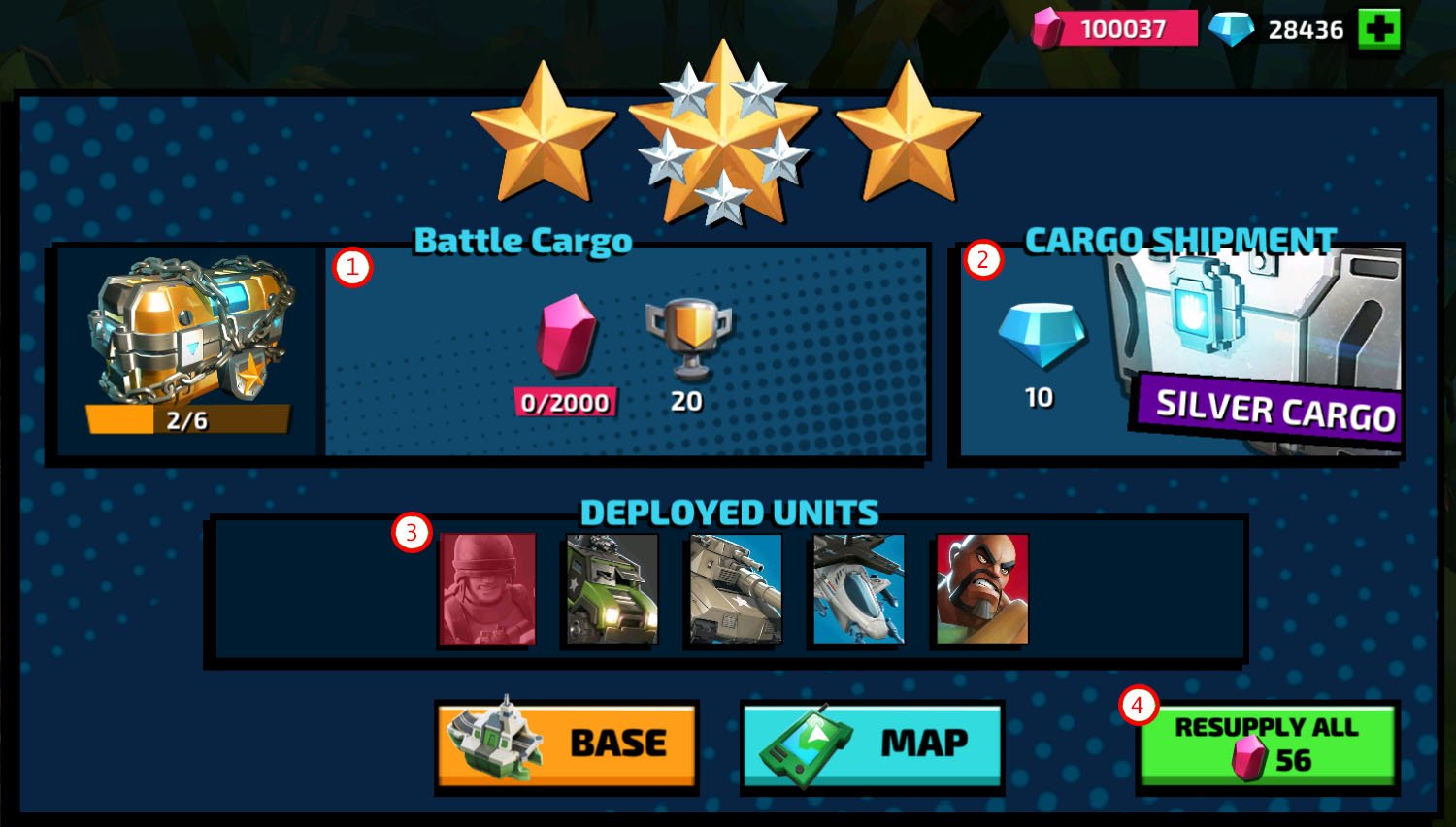 1. Battle Cargo
Whether you're playing in a Campaign mission or fighting against an opposing player, each battle gives you the chance to earn a Battle Cargo. On the Map, clicking on a mission or enemy will show you the loot you could potentially earn.

Mission battles only grant Currency once upon completion, however you can replay them as many times as you want for more Trophies. Since each opposing player you face will likely be different, you'll have an opportunity to earn Currency and Trophies each time.

Initially you'll have 6/6 Battle Cargo available. After winning 6 battles, you'll run out, and need to either wait for them to refresh or spend Diamonds to instantly refresh.

2. Cargo Shipment
Cargo Shipments are awarded to you for achieving 3 Stars in that mission. You can receive them from both Campaign Missions and from invading enemy bases. You can only receive a Cargo Shipment once per mission, and you'll want to make sure you have a slot available to store the new Cargo Shipment you'll earn.

3. Deployed Units
This is a list of all the Units you deployed during the battle. Those that have a red icon are the Units that were defeated during battle. They won't be usable in the next battle unless they're resupplied.

4. Resupply All
This button is a short-cut for you to immediately resupply the Units you've lost during battle. Resupplying costs Minerals, and the cost is dependent on how many Units were defeated.
0
Sign In or Register to comment.