You're not a Private anymore, and neither are your fellow units. Let's give them an upgrade! 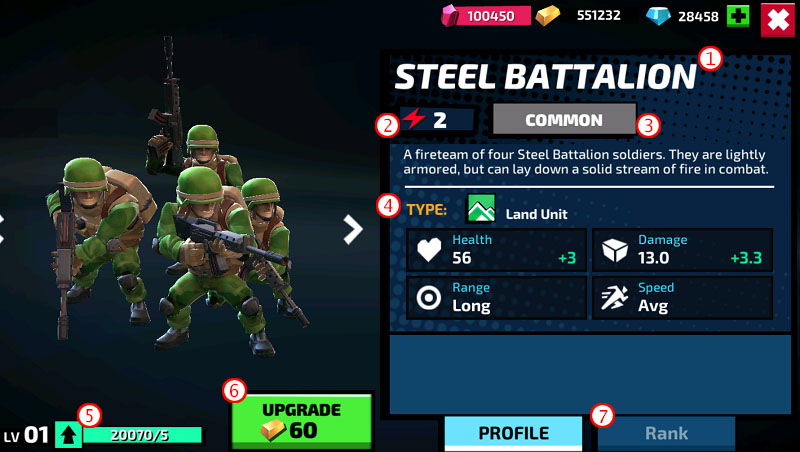 1. Unit Name
This one is pretty straight-forward. It's the name of the Unit you're viewing the Stats of.

2. Action Points
This shows how many Action Points are needed, in order to deploy this Unit to the battlefield.

3. Rarity
Each Unit has a rarity. They go from Common -> Rare -> Epic -> Legendary. The rarity determines how frequently you might encounter their cards in Cargo Shipments. The higher the rarity, the more likely the Unit has a special ability(s) or trait(s).

4. Unit Stats
All Units (with the exception of Commands) have a Unit Type, Health, Damage, Range, and Speed.

Unit Type
The Type of a Unit determines where they are able to be deployed. There are 4 Types: Land, Water, Air, Command.
Health
How much Health a Unit has determines how much damage they can withstand before being defeated. Some Vehicles also have special traits that give them Armor, which is essentially even more Health.

Damage
Damage determines how quickly a Unit can deplete an enemy Unit or Building's Health. Base Damage numbers are displayed in white, and the increase in Damage, upon upgrading to the next level, will be displayed in green.

Range
How close or far away a Unit attacks an enemy is determined by their Range. There are 4 Ranges: Short, Cone, Avg, and Long.
5. Level Up Card Requirements
This meter shows you how many cards of that Unit you need, in order to meet one of the requirements to level it up. You can earn cards by opening up Cargo Shipments, opening a Buyout Box, or receiving Alliance card donations.

6. Upgrade Button
The second and final requirement to level up a Unit is having enough Credits to upgrade. This amount will get slightly higher each time you upgrade the Unit to a higher level. 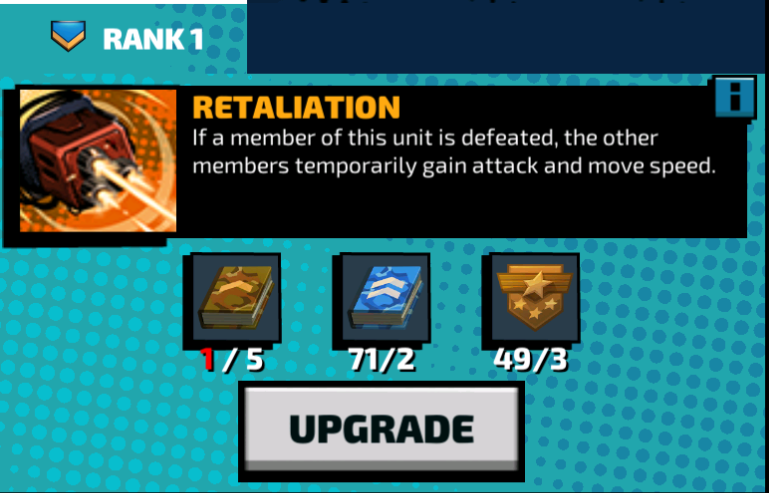 Some Units have special abilities or traits that are unlocked at certain levels. They each require a specific amount of Materials in order to unlock. You can earn Materials by opening a Buyout Box or opening Cargo Shipments.