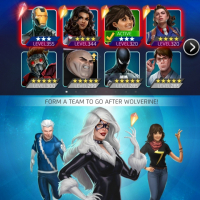 How did we start? Why back then I had a 3* champ... There we were, one by one joining the alliance where we became known as 'the 02' always skimming the edges of 4* rewards for boss battles. Then there were seated as commanders anyone who was around long enough to get promoted... still we could rely on two 4* rewards from an alliance event.
Then one day, after black cat was released, we cleared! Green checks for black cat, better luck this time m'lady. It was wonderful, we cheered, some cried... maybe... but the glory was short lived. For two months after this  it was back to two four star rewards for us. Some commanders had stopped playing.
After a particularly lackluster event, and still ready for wins we decided to move. All but one of our core members made the move. I was watching our old alliance, to see who was moving; the next boss battle quickly approaches. With a day till open, one special agent went on official mission to make one last call. Turns out our missing member had finally read all our moving text... but had already started. Realizing the effect of the move he came home to play through with the team.
Now our first clear in TheNew02 is sinister six, rewarding CapWorthy covers... who shall we adopt as team mascot? Black cat? CapWorthy? Should we make a quilt of 20 characters and name a member to every seat? Cause I'm thinking of making our team shirt. All this and more...