War of the Spark has arrived!

The epic War of the Spark arrives in the 3.5 update, complete with over 200 cards, 4 new Planeswalkers, the new Vanguard Supports, and 3 new events!

You can view the full War of the Spark Card Gallery HERE. For everything else, check out all the details below.

With War of the Spark and the introduction of the Vanguard cards, you will be able to use the most interactive card type in MTGPQ as of yet. 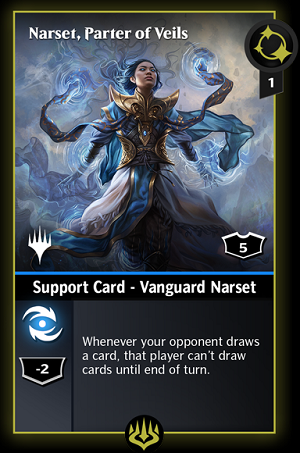 (Above card image contains placeholder values)
Vanguard packs will be permanently available in the Vault with content from old and new collections alike. Initially only Vanguards from WAR will be available, however we will actively increase the number of these cards, as updates are added to the game.

For a closer look at the new Vanguard Supports, check out its blog post HERE

We hope you all enjoy the new dynamic these cards add to the game. Have fun brewing up ideas!

Gideon Blackblade
"Gideon now bears the reforged Blackblade - a soul-thirsty sword he used to vanquish the demonlord Belzenlock and help free Liliana from her contract - which should prove useful in the upcoming battle.

As founder of the Gatewatch, he also bears an oath to work together with his companions to defend the Multiverse...an oatch that has lead them into a final, deadly conflict with Nicol Bolas." 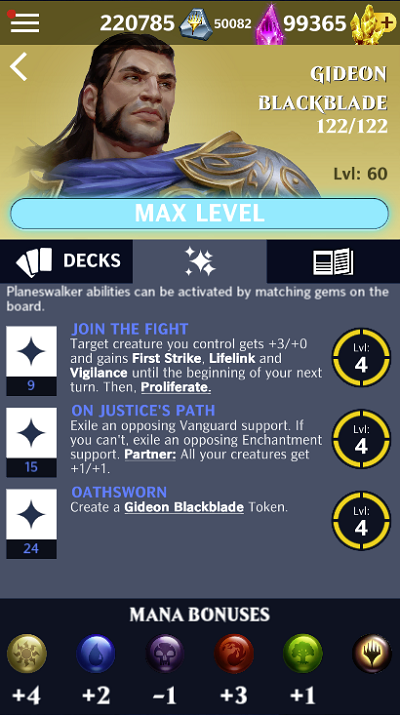 Liliana, Dreadhorde General
"With no choice but to serve the power-hungry dragon Planeswalker, Nicol Bolas, Liliana finds herself using her necromancer's skills as the field general of the Dreadhorde, Bolas's army of zombie Eternals.

While she enjoys the authority, ultimately Liliana's greatest love and first priority is herself. She's convinced that everyone else is only looking out for themselves, and she's just better at playing the game." 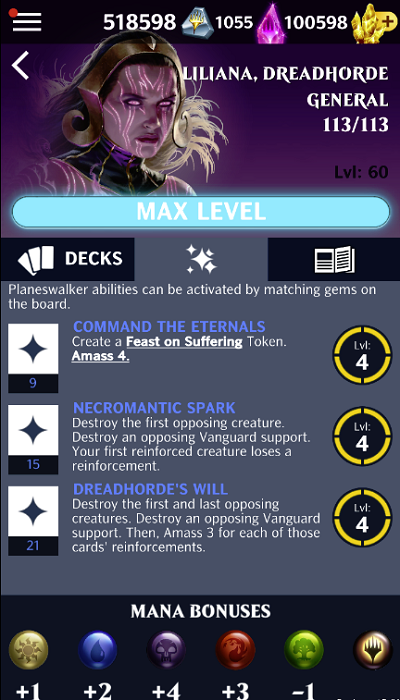 Feast on Suffering
[Black] Support Card - Enchantment (3) Whenever a creature or Vanguard support you control is destroyed, draw a card.
Nicol Bolas, Dragon-God
"Nicol Bolas's schemes have led to Ravnica. His true purpose is not yet revealed, but the crucial pieces of his plan are falling into place.

Through the agency of his minions he has subverted the leadership of Ravnica's ancient guilds and undermined the fabric of the Guildpact. Heightened tension and conflict now loom over the plane." 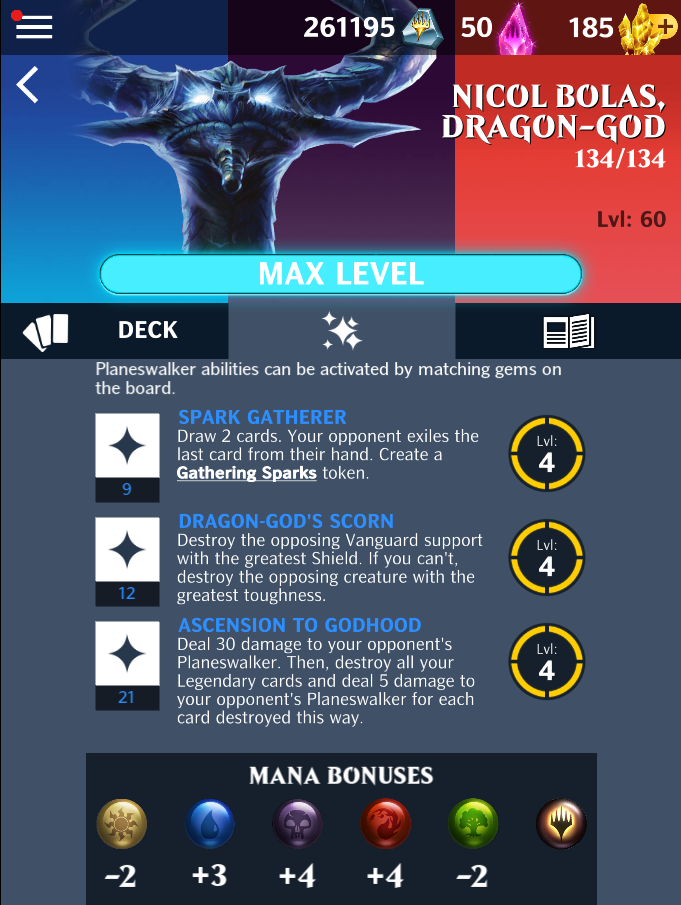 Gathering Sparks Token
[Blue,Black,Red] Support Card - Enchantment (3) Whenever your opponent activates a Loyalty ability or a Vanguard ability, gain 2 Loyalty.
Tezzeret, Master of the Bridge
"Having incorporated the Planar Bridge in his body, Tezzeret himself could function as a conduit from Amonkhet to Ravnica for the invasion of the Eternal Dreadhorde.

Assisting his cruel master, Tezzeret will fight to keep the bridge open, while the endless hordes of Eternals spread havoc on the plane." 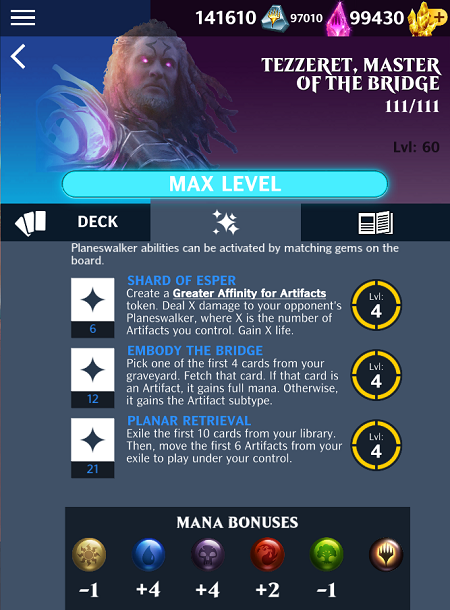 Greater Affinity for Artifacts
[Colorless] Support Card - Artifact (3) At the beginning of your turn, the first creature and the first Vanguard support in your hand gain X mana, where X is the number of Artifacts you control.

The Elderspark (PvE) - Coalition
This is a weekend PvE Coalition event with 4 spliced nodes; 3 encounters each, just like in Avacyn's Madness. It features 4 different thematic nodes, each with 2 regular challenges and 1 stage boss. All encounters of the same thematic node have an event support related to one of the mechanics from War of the Spark (Amass, Partner, or Proliferate)

Ravnica At War (PvP) - Coalition
This is a weekly PvP Coalition event with 5 different versions, each featuring a different color combination split in 3 nodes. This event doesn't focus on Nicol Bolas himself, but rather on the Eternals, the allies of Bolas, and the havoc they've unleashed upon Ravnica.

Role Reversal (PvP)
This is a fun and unpretentious Standard, non-Coalition PvP event that brings a unique playstyle for those who would like to try facing off against their own decks while using their opponent's cards instead. The event features a special support that restricts you from drawing cards from only the opposing deck. You're still able to use your Planeswalker's abilities though.

Amass
Amass creates X number of Zombie Army tokens with the ability to grow whenever another card with Amass is cast.

Partner
A card with Partner receives a boost to its effects if you cast it while you control a Vanguard support.

Proliferate
Cards with Proliferate will bolster and provide extra value to decks, particularly ones focused around Loyalty abilities and Vanguards. Proliferate reads: "When you Proliferate, gain 1 Loyalty. Then, your buffed creatures get +1/+1 and your Vanguard supports gain 1 shield."

For this release, we decided to make some changes to cards that were seeing too much play (due to a power disparity between similar options), based on forum feedback and player behavior data. Blue Sun's Zenith and Plague Wind were possibly the best cards in their colors and slot into almost every deck.

The changes being made should guarantee these cards remain playable, yet aren't as dominant in almost every deck they're in. In addition, we've adjusted the power level of over 20 underused and underperforming Masterpieces and Mythics from existing sets from both Standard and Legacy

Thank you for your feedback. We'll keep listening to it as much as possible. These changes, coupled with the new Vanguard cards, are part of a long-term plan to give players more options on how they want to enjoy the game. Keep an eye on the horizon for more news in the coming weeks.