Brigby ADMINISTRATORS Posts: 7,757 Site Admin
September 2018 edited October 2018 in MtGPQ News & Announcements
Update 2: The 2.9 update is now anticipated to be released tomorrow, and we will be performing events maintenance following it. During this time, all planned events for tomorrow have been deactivated:
In addition, the Oath of the Gatewatch: Part 1 event will unfortunately need to be ended early at 12:00 UTC on 9/27, as opposed to the originally scheduled 15:00 UTC on 9/28. We apologize for the inconvenience, however thank you for understanding.
---------------
Update: We originally planned on having the 2.9 update live today, however the team encountered a major issue, which unfortunately requires delaying the update in order to address. Subsequently, this means that the Duel Decks beta will also have to be delayed. We apologize for the inconvenience. Once we receive additional information, we'll be sure to communicate any news to the community.

During April Fools Day, we jokingly introduced a new event type, where players could play on either the Goats or Chupacabras teams. While the specific details were clearly seen as comical, we discovered that many players grew fond of the concept, and were excited to see whether it would actually become a reality.

We took that notion to heart, and we’re excited to announce that we are officially adding in a brand new event: Duel Decks!

Not only that, but we want to offer a limited number of players the chance to be a part of an exclusive beta run, and help provide feedback on the event. Before you sign up though, we want everyone to please take a read through Oktagon’s blog post, which should give you a much clearer idea as to what Duel Decks is. Check it out here: Duel Decks Blog Post

Excited to be a part of the creation process for Duel Decks? Sign up here: Duel Decks Beta Sign-Up
Signs up are closed now. Thank you for your interest! We hope you enjoy Duel Decks when they become available to all players in the near future.

Nissa, Worldwaker
Desperate to save her world, Nissa broke the lock that kept the Eldrazi on Zendikar. Her hope was that the Eldrazi, freed of their confines, would travel out into the Multiverse. 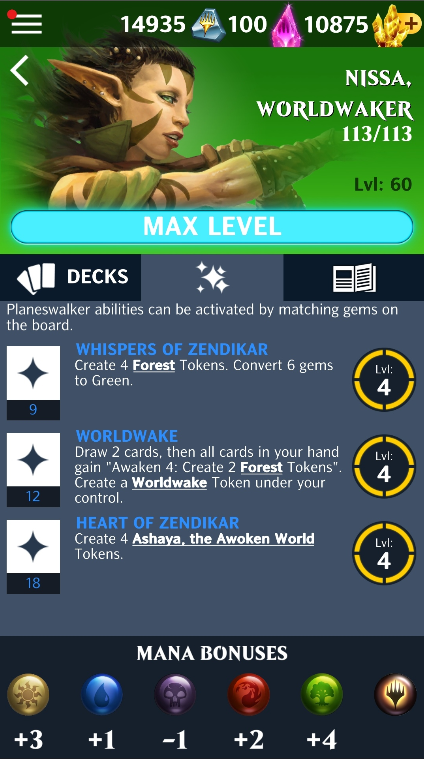 Forest: (1/1 Forest Elemental Land Creature. Haste)
Worldwake: (4 Shield Support Card - Enchantment. Landfall: Your creatures get +1/+1 until end of turn.)
Seedling Ashaya, the Awoken World: (2/2 Elemental Creature. Haste, Trample. Leader: Elemental. When this creature is reinforced 6 or more times, it gains Regenerate 2. While this creature is reinforced 12 or more times, it gains Hexproof.)
The Eldrazi Desolation
The Eldrazi were inscrutable entities of the Blind Eternities, able to travel between planes to devour worlds. Unable to defeat the titans, the ancient Planeswalkers used Zendikar's hedrons to lure, contain, and immobilize them. They remained trapped in stasis and hidden for millennia until younger Planeswalkers inadvertently released them. 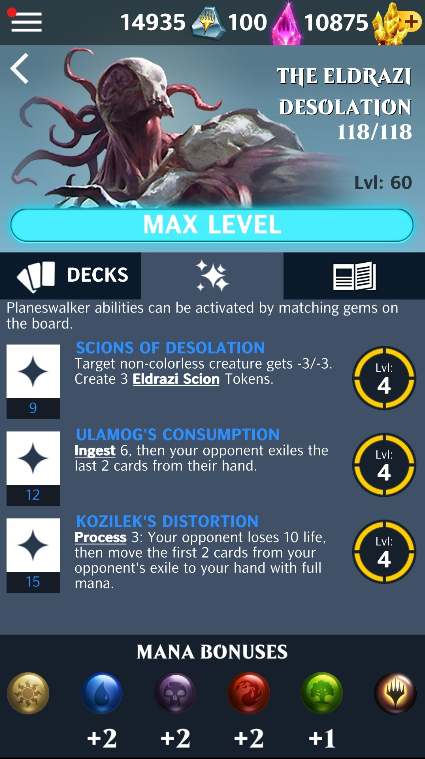 Eldrazi Scion: (1/1 Creature. Defender) When this creature is Destroyed, you gain mana equal to this creature's Power times 3.

No changes to Standard Rotation in 2.9

To celebrate the arrival of the new Duel Decks event, we will have a brand new selection of special offers available. Keep an eye out in the Vault, so you can snag them while you can!

Standard to Legacy
The following events will be changed from Standard mode to Legacy mode:
Event Rewards
Certain Booster Packs given as rewards will be changed to the respective card set that the event was created for:

The following change-list describes overall changes to several cards in the game. Most of these changes are slight adjustments to cards that felt underpowered or overpowered.
Grove RumblerEmbodiment of InsightSeed GuardianMakeshift MunitionsAegis of the Heavens