*Since the Communications team will be busy traveling to Gen Con tomorrow, we have decided to post the Final Release Notes a day early. Enjoy!

We discovered an issue where all Supports display the wrong Shield amount outside of a battle, however once in-battle, they will display the correct amounts. We unfortunately were unable to get the fix into this build, however we will be sure to include this in the following 2.8.1 build.
Thank you for understanding!

Join us as we uncover the contentious history between Nicol Bolas and his twin brother Ugin.

Core Set 2019 is officially coming to Magic: The Gathering - Puzzle Quest, and with it comes 6 new Planeswalkers, 2 new Events, and 212 brand new cards!

With Core Set 2019's arrival, the card sets within Standard will be changing. Hour of Devastation will no longer be in Standard, and Core Set 2019 will be rotating in! Origins will still remain in Standard.

Nicol Bolas, the Ravager / Nicol Bolas, the Arisen (Available Now!)
Almost before time itself, the conflict between the Elder Dragons tore the fabric of countless planes. Becoming a Planeswalker, Nicol Bolas emerged victorious, one of the few survivors. Since then, the god-like Bolas has risen to be the most powerful dragon between planes, conquering thousands of realms, followers and immeasurable magic knowledge.

(When transformed into Nicol Bolas, the Arisen)
Perhaps the oldest Planeswalker in existence, Nicol Bolas rules over multiple planes and hoards incalculable treasures. When rifts in time threatened Dominaria, Bolas helped heal the plane, sacrificing his omnipotence and immortality. Mortal, but still a dragon, he used his magic knowledge and intellect to woven schemes that would lead him back to divinity. 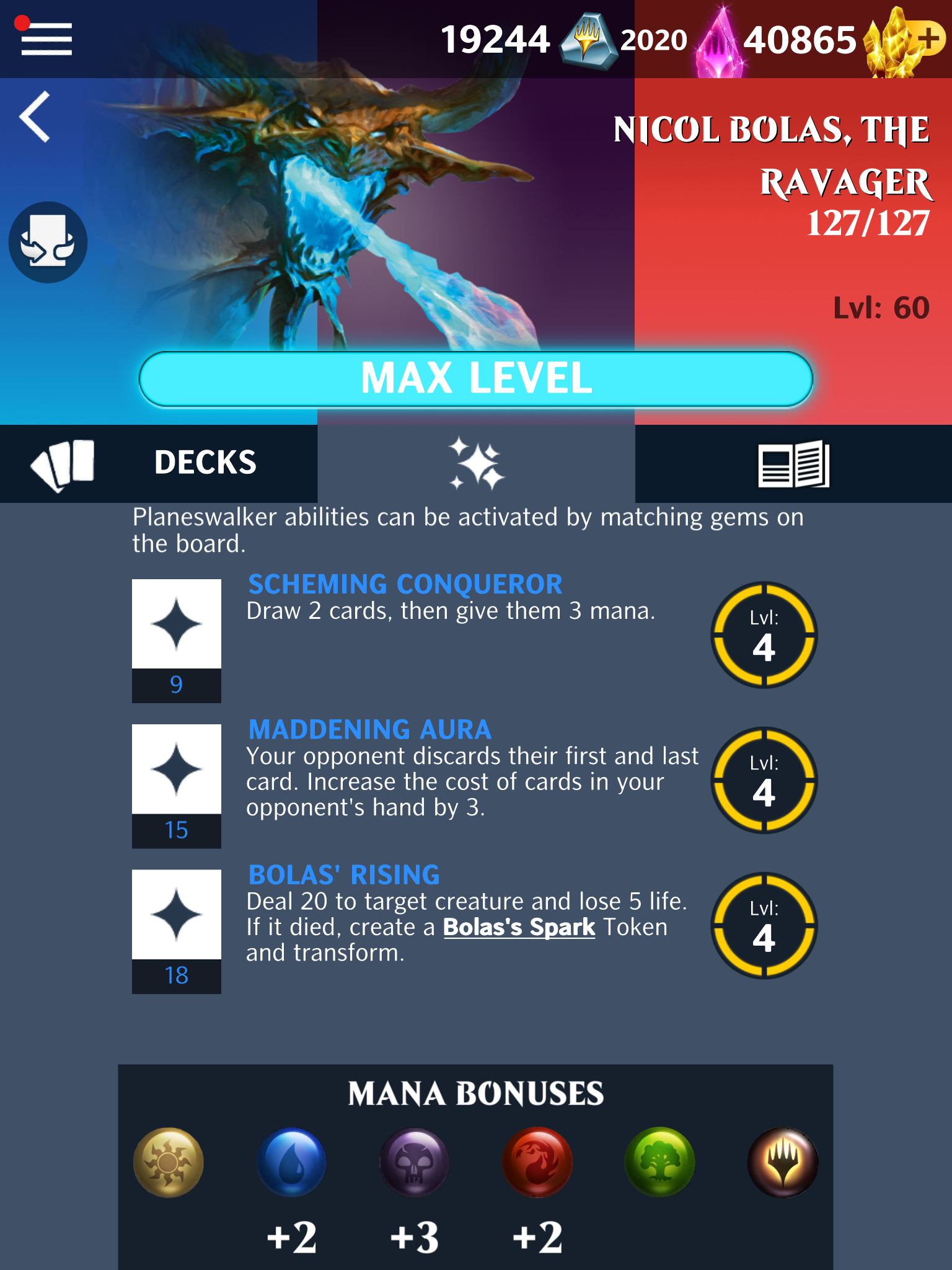 Bolas's Spark: This support can't be destroyed or exiled. At the beginning of every turn, gain 2 Loyalty. 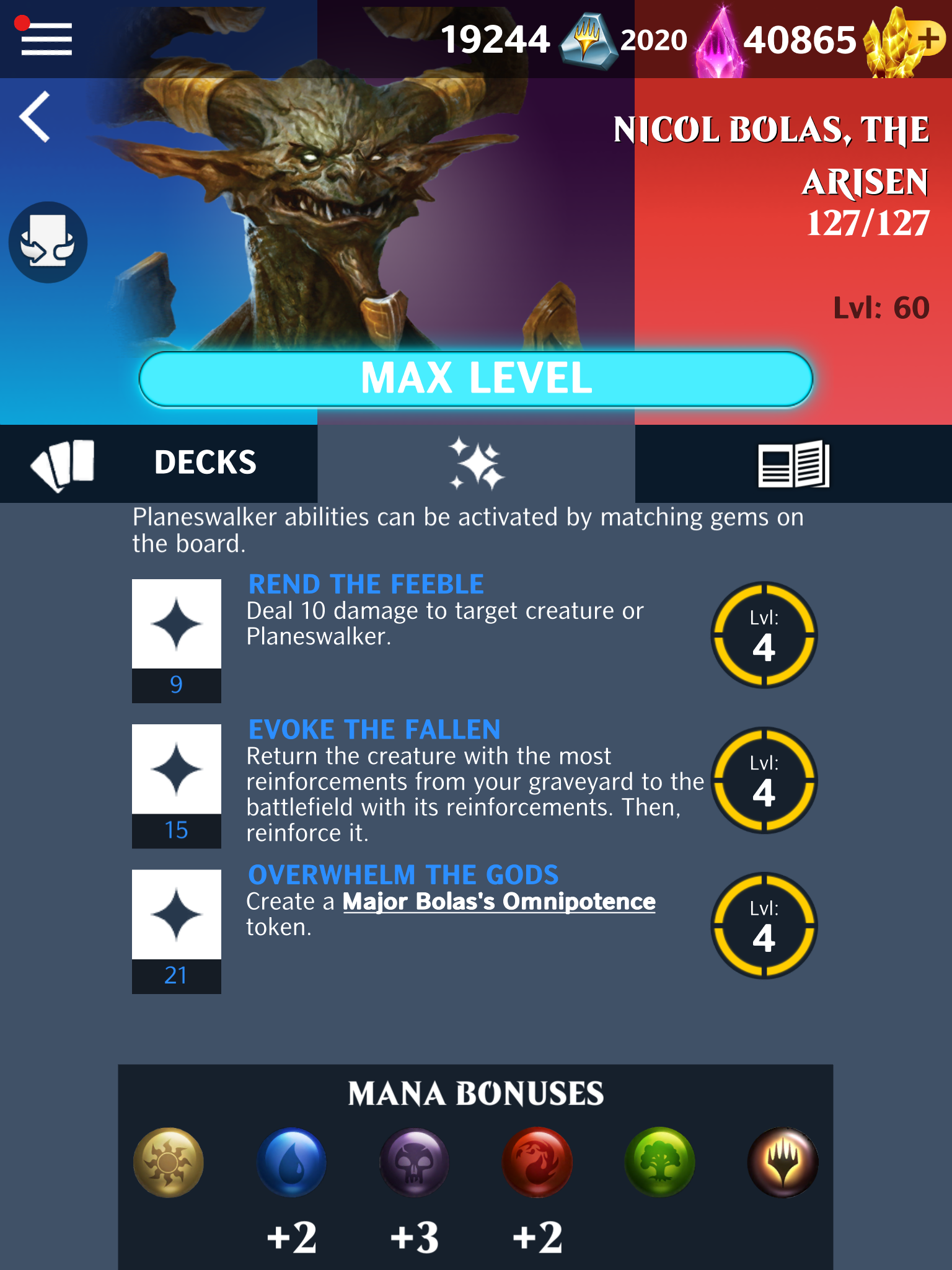 Major Bolas's Omnipotence: At the beginning of every turn, this support loses 1 shield. Your opponent can't draw cards.
Ajani, Adversary of Tyrants
Ajani Goldmane’s magic purifies the body and soul, evoking his allies’ inner essence. On his homeplane of Alara, he confronted and defeated Nicol Bolas by turning the dragon’s soul against him. Driven by his sense of justice, Ajani joined the Gatewatch and became an advisor to leonin communities on many planes and a mentor to other heroes, particularly Planeswalkers. 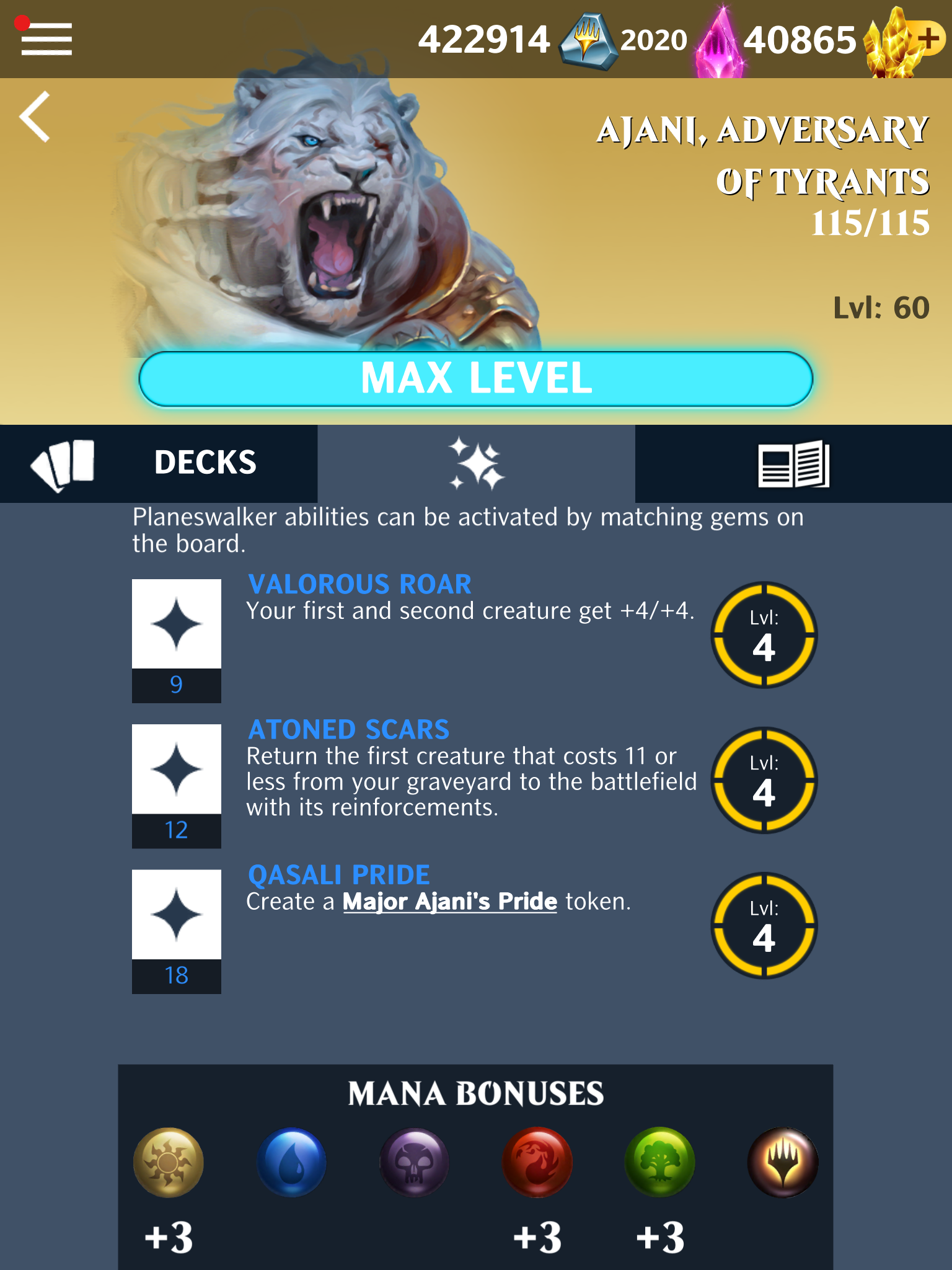 Major Ajani's Pride: At the beginning of your turn, create 6 Cat tokens.
Liliana, Untouched by Death
Liliana Vess specializes in the power of death, reanimating corpses and corrupting the living. Her desire to avoid her own death led her to another powerful Planeswalker: Nicol Bolas. Bolas brokered a pact between Liliana and four demons from the Multiverse, giving her immense magical power and ageless life. Subsequently, she resolved to free herself from the demons’ control by any means necessary. 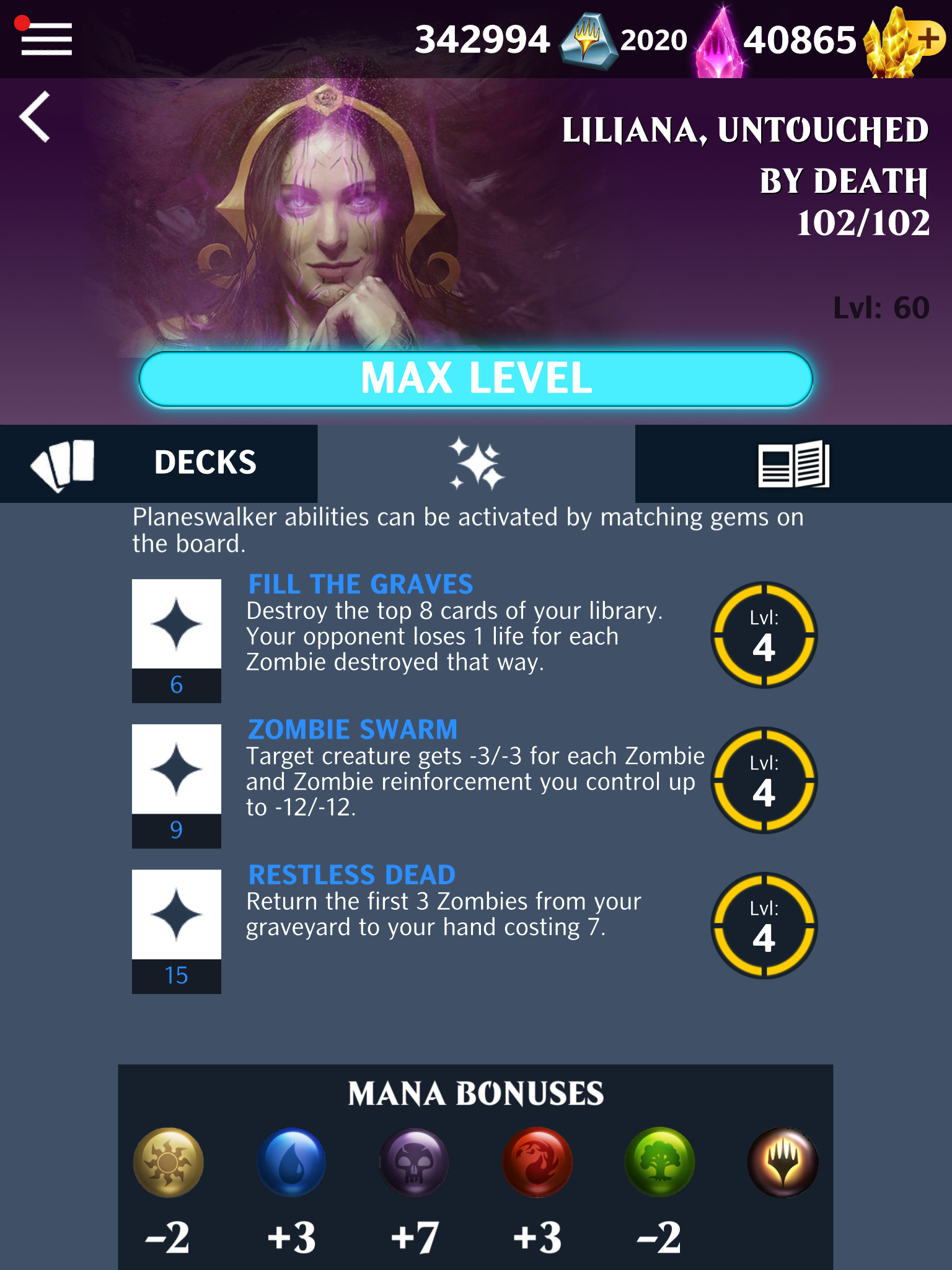 Sarkhan, Fireblood
Sarkhan Vol’s obsession with dragons led him to pledge loyalty to the mighty Nicol Bolas. But Ajani’s victory over his master made his mind start to unravel. He was sent to Zendikar, where his festering madness contributed to the release of the Eldrazi - all according to Bolas’ secret plan. Sarkhan returned to his native Tarkir, travelling into ancient history to restore the dragons to his home plane. 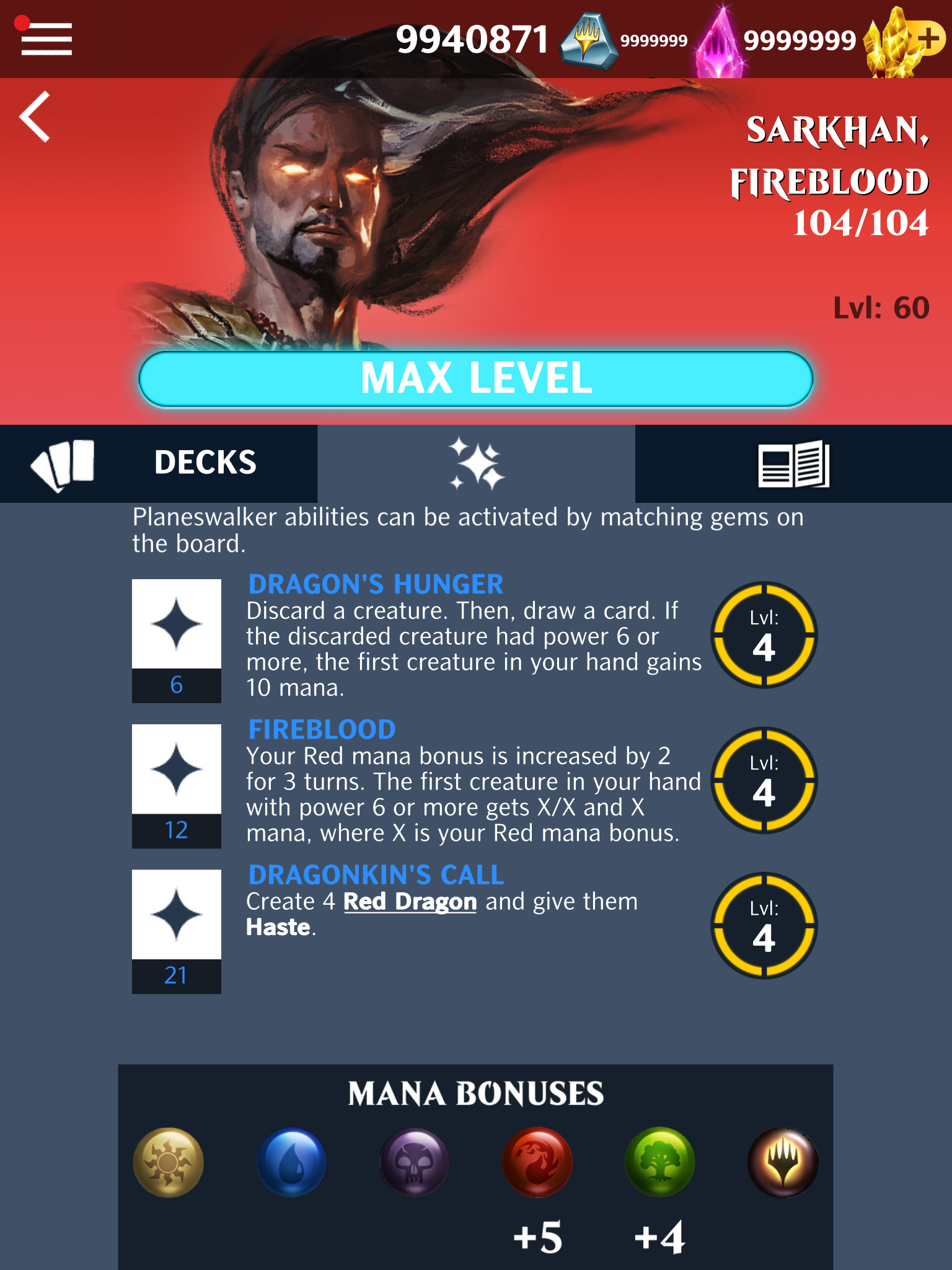 Tezzeret, Artifice Master
Native of the plane of Alara, Tezzeret is an artificer and master of etherium crafting. While young, he replaced his own arm with an artificial etherium limb. He agreed to serve Nicol Bolas in exchange for power, and most recently was integral to the construction of a device to open portals between planes. Although Bolas’s enemies though the device was destroyed, Tezzeret incorporated the mechanisms into his body, becoming a planar bridge himself. 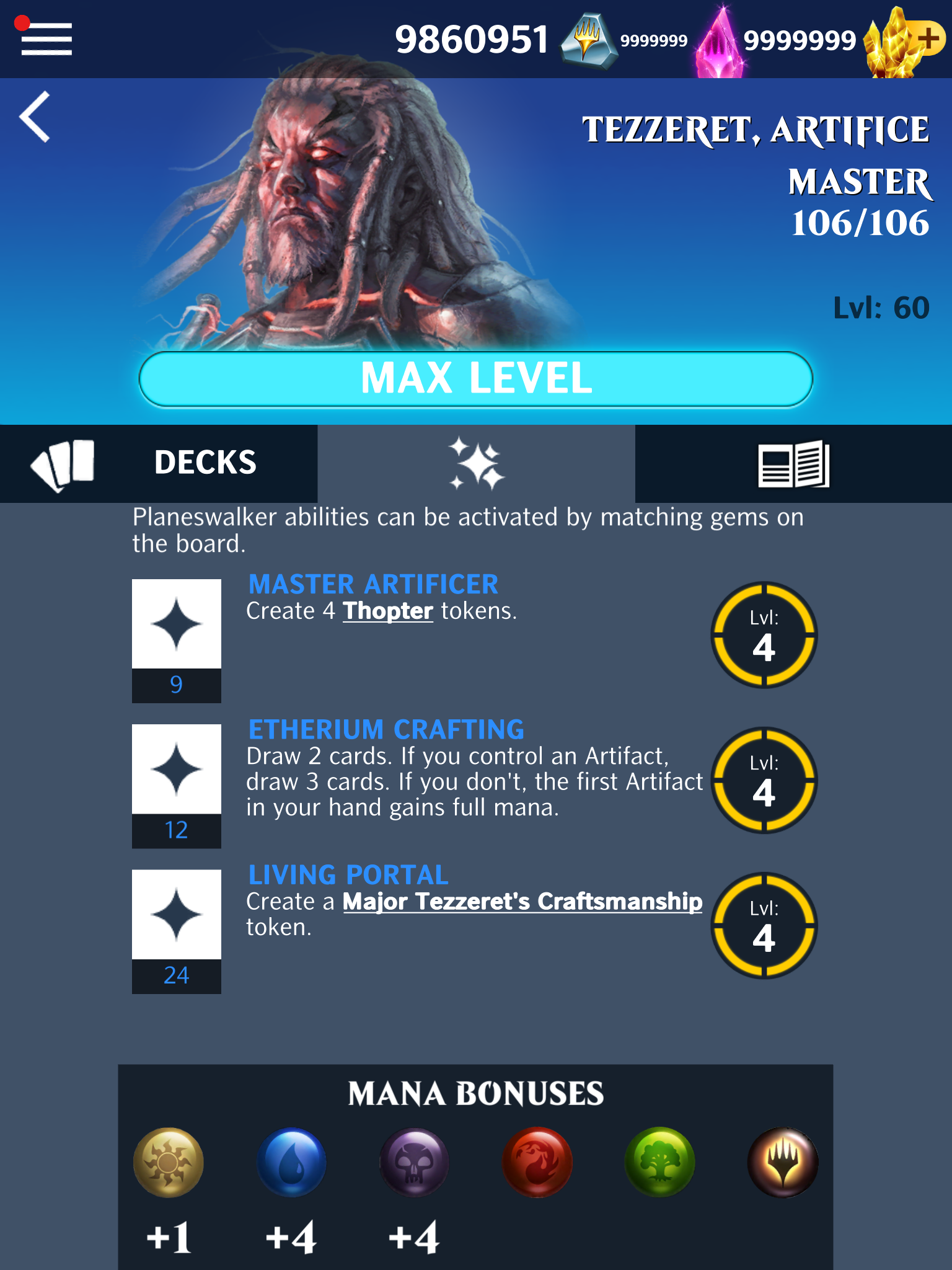 Major Tezzeret's Craftsmanship: At the beginning of your turn, fetch the first first creature and support from your library. They gain full mana.

Vivien Reid
Vivien is a guardian and guide from the once forested plane of Skala, ravaged by arrival of Nicol Bolas. Vivien’s mentory imbued her arkbow with invocations in a desperate attempt to repel the ragon. As the woodland burned, her Planeswalker spark ignited and she became a guide to the forests and animals of the Multiverse, using her arkbow’s invocations to her defense. 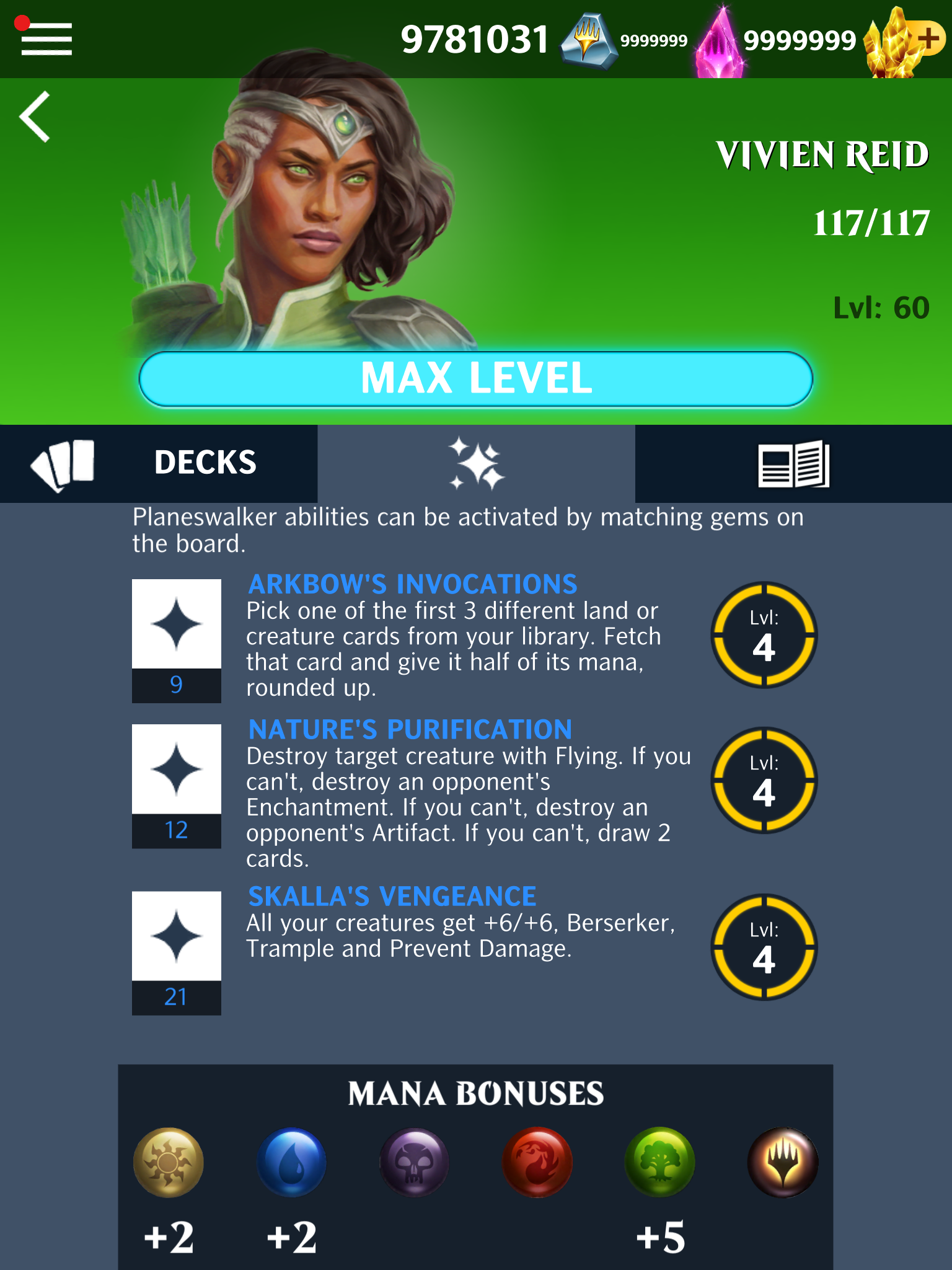 Flash
Flash is being adapted into MtGPQ, and with it, players can stay one more step ahead of your opponents: Stored Mana
Stored Mana cards will store mana above their base cost up to a maximum, and can only be cast if their stored mana is 1 or more. Players will have an opportunity to cast spells with this ability, if they reach max Stored Mana due to cascades and/or other effects, regardless of the auto-cast. This will allow players a chance to immediately cast them, if they get lucky on their matches.

The Dragon War - Standard PVP Coalition
Choose your side on the Dragon War and make alliances with the Elder Dragon to subdue your foes. Each node allows only a specific combination of colors related to that dragon, and gives the player special abilities that are triggered whenever he or she activates a Planeswalker ability.

Node A: Arcades’ Strategy
Node B: Chromium’s Transformations
Node C: Nicol Bolas’s Rising
Node D : Vaevictis Atrocities
Node E: Palladia-Mors’ Devastation
Training Grounds - Standard PVP
You asked for it, and now it’s finally here! Test your Standard deck in the new Standard version of Training Grounds. Train as much as you like and earn some Mana Runes while doing so. There are no secondary objectives, and the goal is just to win!

To celebrate the arrival of Core Set 2019, we will have a brand new selection of special offers available. Keep an eye out in the Vault, so you can snag them while you can!

Cycling cards have been a dominant yet uninteractive strategy for a while now and, and as the strategy transitions into Legacy, we wanted to ensure that it doesn’t continue that way. As a result, we are introducing the following changes:
These changes should keep the strategy viable while making it require more setup to achieve the best results with it.

The following change-list describes overall changes to several cards in the game. Most of these changes are slight adjustments to cards that felt underpowered or overpowered.

After identifying that certain Lands in the game had conflicting costs, we found this was a good time to review and change their overall value. The following change-list has mostly buffs for all Lands in the game, and should make low count gem converting more accessible to all colors, whereas large count gem converting remains a (mostly) green aspect.