Brigby ADMINISTRATORS Posts: 7,757 Site Admin
June 2018 edited June 2018 in MPQ News and Announcements
Update: 5-Star characters are the strongest characters in the game, but they're also some of the rarest. We've received a lot of positive feedback from players, telling us that Saved Covers has been a lot of help, but we've also heard the feedback on how we can improve the feature. Waiting for 5-Star covers to be saved can mean a long time before they level up, so we want to make this experience a bit better for players.

Following this Wednesday's (6/20) patch update, 5-Star characters will only require 3 saved covers, in order to trade them in for a new level in any of that character's powers. Please note that if you already have 4 or 5 covers saved, prior to this change, the display will look a bit odd afterwards, but your covers will be safe. Once you redeem those covers, then the maximum changes to 3.
==========
Hi Everyone,

Getting a new character cover is supposed to be an exciting occurrence, and most of the time it is! You open up that shiny pack, or compete in a hard-fought event, and earn a brand new cover; growing your roster stronger because of it.

Other times though, you hope to find that last 13th cover to complete a character’s power set, only to discover it’s a power you have 5 covers in already. We understand that can be frustrating, so we want to make that a better experience for players moving forward.

Saved Covers allows you to store covers you aren’t able to use, in order to convert them into another power’s level. 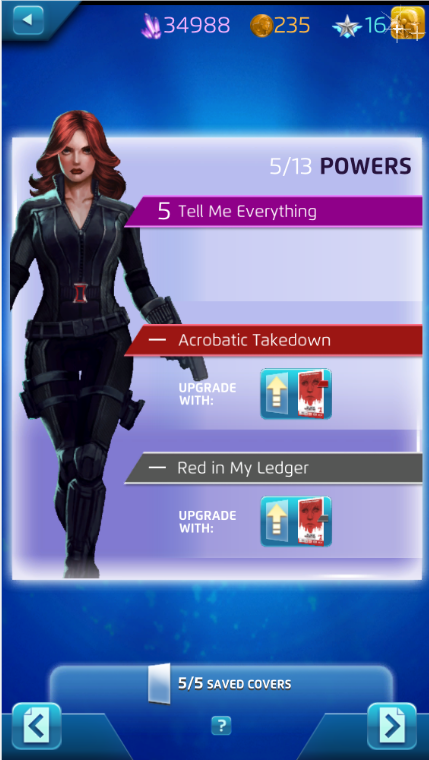 We hope that you all enjoy this new feature!
10
This discussion has been closed.