60 years have passed since the Mending, and the world is finally healing from its wounds. With its arrival in Magic: the Gathering, Puzzle Quest, we see that 2 new Planeswalkers have emerged, along with 192 Dominaria cards. Not only do we see new cards and characters, but new events that illustrate Dominaria’s rich yet tempestuous history, as well.

With Dominaria's arrival, the card sets within Standard will be changing. Amonkhet will no longer be in Standard, and Dominaria will be rotating in!

After sacrificing his Planeswalker spark to save Dominaria from temporal rifts caused by his previous meddling, Teferi could no longer traverse the planes. Now, with his spark restored by his friend Jhoira, he is ready to confront the mistakes of his past. Mistakes that he is constantly reminded by the unnatural void that took his homeland's (Zhalfir) place in the plane.

Teferi will be available at the launch of 2.7, so be sure to check him out after the update! Jaya is a native of Dominaria whose skills, abilities, recklessness and impetuousness made her influence known to the Multiverse across generations. She founded Keral Keep, a pyromantic monastery in the plane Regatha, where Chandra Nalaar trained. After the Mending, she started aging normally, unlike Teferi and Karn, and is fully accepting of the fact she is at the end of a very long and productive life.

Jaya will be available in game at a later date, so keep an eye out for her arrival! 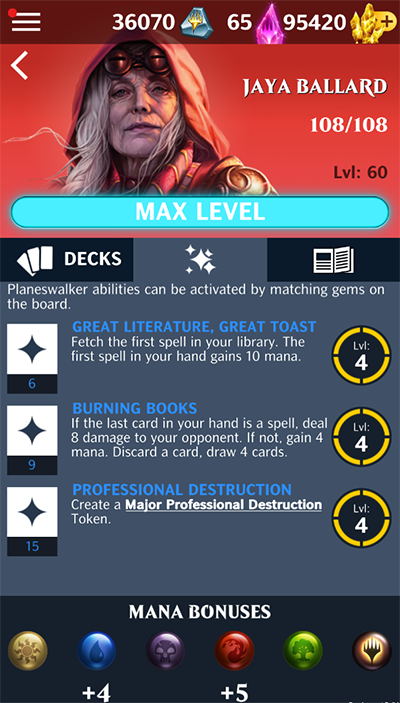 Major Professional Destruction Token (4 Shield) - Whenever you draw a spell, give it full mana, and create a copy of it.

Yes, you heard right! Artifacts are coming to Magic: Puzzle Quest, and they are represented as another new sub-type for Supports.

When a creature with Leader enters the battlefield, it exiles all tokens you control with any of the given subtypes, and it’s reinforced for each token and token reinforcement it exiled.

Board the Weatherlight with its new crew and go on a journey through the secrets of Dominaria. In each encounter, the Weatherlight and one of its crew members will be added to your hand. Try to use this helpful assistant to beat challenges and visit amazing places.

Similar to Avacyn’s Madness, this event is a sequential node challenge with 6 encounters divided into 2 great nodes. These encounters all focus on some of Dominaria’s iconic landscapes, inhabitants, and regions: Shiv, New Benalia, Llanowar, the Tolarian Academies, Urborg, and the Zhalfirin Void.

Each encounter has specific objectives that relate to the place where the event occurs. For example, The Zhalfirin Void features a special rule that pays tribute to an old MTG mechanic: Phasing.

Get your first experience of this epic adventure right after 2.7 launches.

Experience the history of Dominaria by joining in its most memorable moments. In each of the 4 encounters, a card from Dominaria will be added to your hand every 4 turns. This card is directly related to that moment in Dominaria’s rich past.

Starting from the Ice Age and leading up to the Mending, the encounters in Journey Through History will allow you to experience each of the Ice Age’s important characters and moments: the Brother’s War, the Shard of the Twelve Worlds, The Balduvian and Kjeldoran Alliance, The Hordes of Lim-Dûl, and the World Spell.

Brace yourself and prepare for The Long Cold Darkness’s arrival in June.