Check out the brand new 5-Star Captain America (Infinity War), and find out how you can recruit him onto your team! (Although it's probably best not to make him sign a contract.) 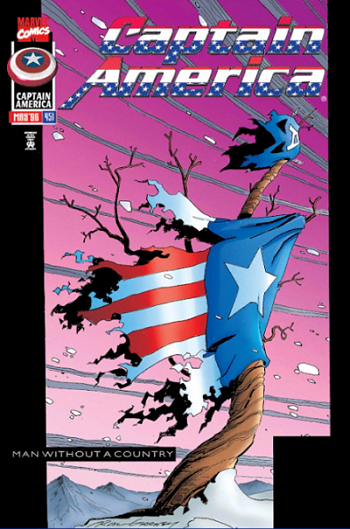 AP
Cap distracts the enemy with a false advance, misleading them and leaving their backline vulnerable. Deals 10,130 damage to the non-target enemies.
(PASSIVE) When only 1 enemy remains, this power becomes Coup de Grâce.

AP
At the climax of battle, Cap summons all his strength to land a finishing blow. Deals 15,185 damage. Destroys all friendly colored AP, dealing 868 damage for each AP destroyed.

Man Without a Country - 6

AP
Even without his shield, Captain America protects the innocent with covert tactics. Choose a basic tile. Destroy 6 enemy AP in that tile's color and that tile becomes a 5-turn Countdown tile. While it's on the board, enemies may not fire powers in its color.

AP
Captain America reaches down and lifts up his fallen ally. This battle's not over yet. Revives a Downed ally and grants them a burst of 60% health.

Come And Get Me