Cymmina Posts: 413 Mover and Shaker
July 2015 edited April 2017 in MPQ Tips and Guides
Most of you have probably never heard of Gamependium, but it's a site I started back in 2005 when I was obsessing about Guild Wars and made a bunch of web utilities for it. It's a bit of a long story as to why it's been down for the past several years, but I've started working on it again now that I'm obessing over MPQ.

Front page if you're logged in and have submitted your roster data:

Simple overview of the upcoming DDQ prizes in a convenient calendar format (with the week starting on Monday, rather than Sunday).

There is also a convenient side-by-side list of what characters the next 10 tokens will be for, so you know how long to horde your tokens.

I know what you're saying, "but cymmina, you already wrote a roster tracker!" This is a complete rewrite with a few new features:

The downside is that now you have to sign-up to use it (but registration is instant! for now, anyway).

The 'rosters' page is currently only accessible if you're logged in, but all rosters are visible to the public if you can find a link to one (this is my roster).

Here's what the rosters page looks like once you're logged in and have created a roster or two: 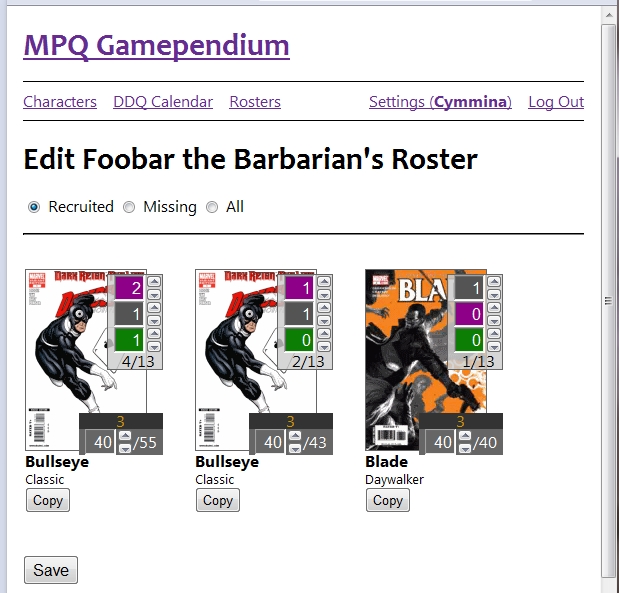 You might be thinking to yourself, "that all sounds great, but I have a roster created by your old tool, is there a way I can import it?" There certainly is!

There's not too much to say about the character data. Other than the basic attributes (name, style, rarity, colors), you can see what builds are currently the most popular: Black Widow (Original).

I don't want to make too many promises I can't keep, but here's a short list of what I'm planning to add in the near future: