“The title of Grand Master of Flowers is given to the senior monk at the Monastery of the Yellow Rose. However, this particular Grand Master accumulates many other titles as another persona: Bahamut, the dragon god of justice.” 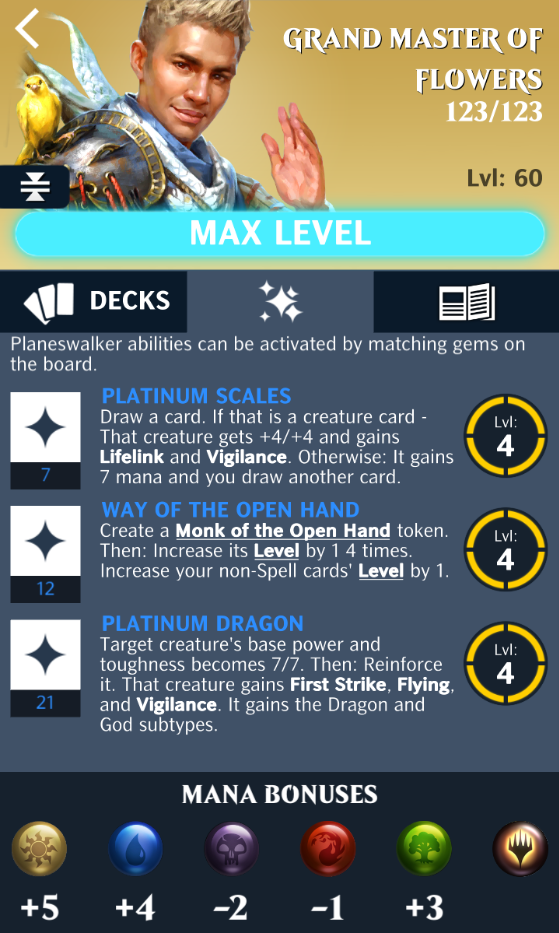 Monk of the Open Hand

When you cast your second card each turn: Increase this card's Level by 1.

When this card's Level is increased: Reinforce this creature. Then: Disable target opposing creature without Double Strike, First Strike, or Vigilance until the beginning of your next turn. This effect can trigger up to 3 times per turn.

As long as this card's Level is 7 or more — This creature gains Double Strike.

“Mordenkainen’s paranoia made him so careful that most of the powerful spells found in books were of his creation. Those that face Mordenkainen might say he’s just a paranoid old man - they don’t say that twice.”
Max Level Stats 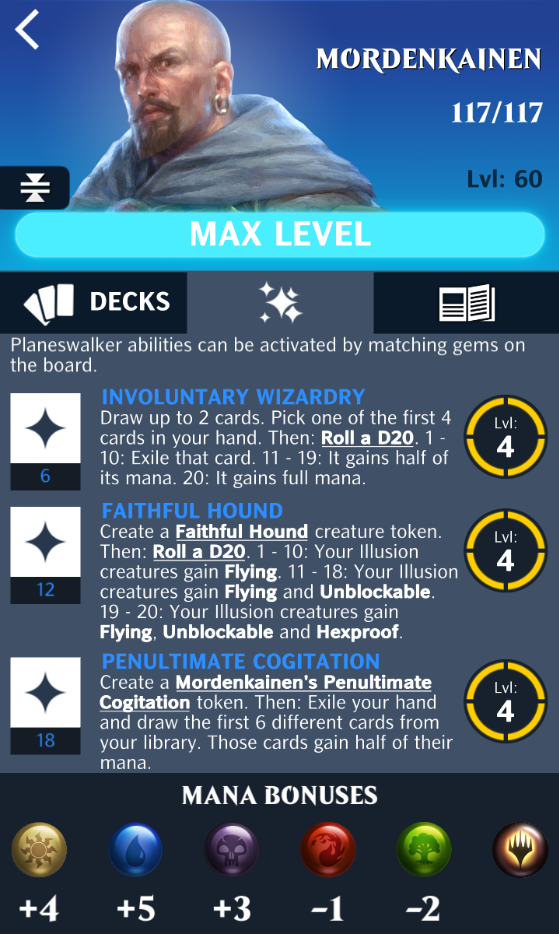 “When this creature attacks: Remove all Buffs from the first opposing Buffed creature.

When this creature enters the battlefield: It gets +2/+2 for each card with a different name in your hand.”

“When you cast a noncopy Spell card for the first time each turn: Roll a D20.

“The queen of the Demonweb Pits, the goddess of the Drow, the Dark Mother: Lolth. Those who oppose her rule soon become part of her legion - willingly or not.” 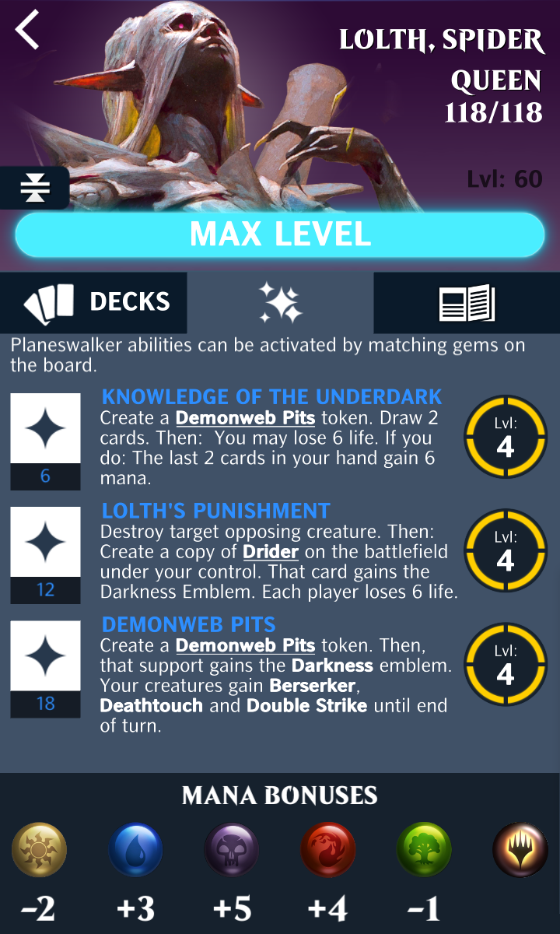 “When a creature you control dies: Gain 2 Loyalty.

If that card is a nontoken creature -  Create a Black Spider token.

If this support has the Darkness emblem. - When a nontoken creature dies: Create X Black Spider tokens. X is equal to that creature's toughness.”

“Once an angel of the Seven Heavens, now an archdevil of the Nine Hells. Zariel, the Archduke of Avernus commands her legion of devils in the neverending Blood War.” 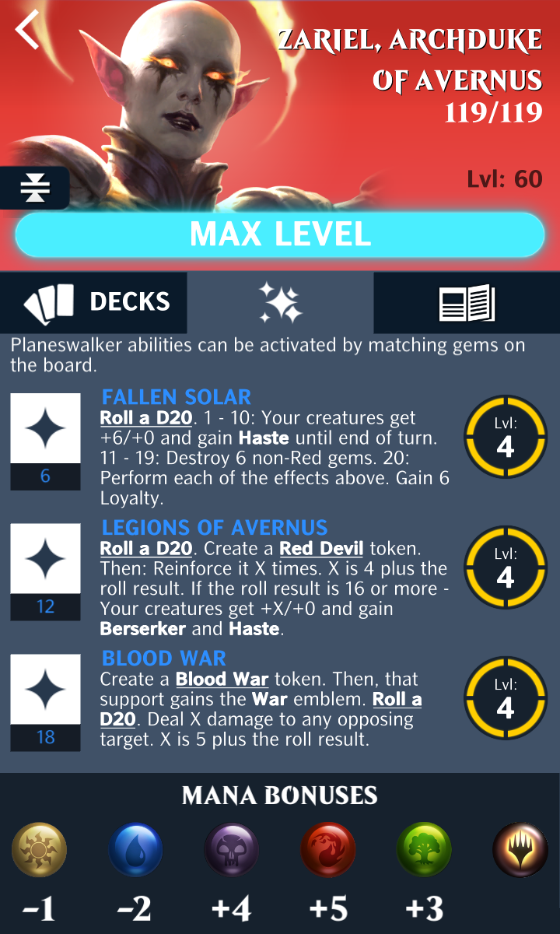 “When your first creature attacks: Reinforce that creature. It gains Double Strike until end of turn.

If this support has the War emblem — When a creature dies: Deal X damage to your opponent's Planeswalker. X is equal to that creature's power.”

“The bearer of Morningmist brings joy and excitement wherever she sets foot into. Legends? Romances? Adventures? When Ellywick Tumblestrum sings, everyone that listens is able to join the stories.” 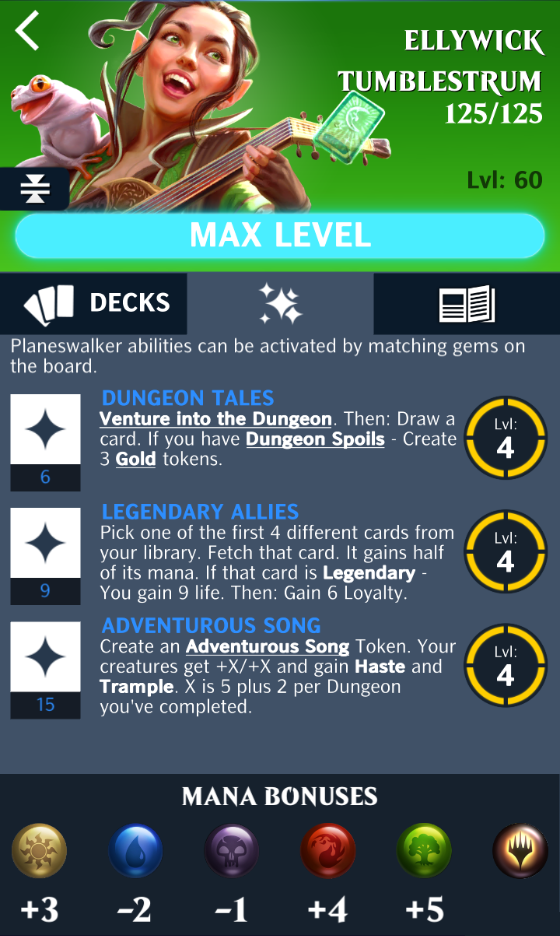 When you make your first match during your turn: Venture into the Dungeon. Then: For each Dungeon you've completed, trigger the following effects —

Dungeon of the Mad Mage: Each card in your hand gains 3 mana.

Lost Mine of Phandelver: Your creatures get +2/+2.

Tomb of Annihilation: Gain 3 life for each Legendary card on the battlefield and in all graveyards.

“The Dungeon Master is a mysterious mage with vast knowledge and power.  His goals are mostly unclear, although they seem to be aligned with restoring the equilibrium between order and chaos.” 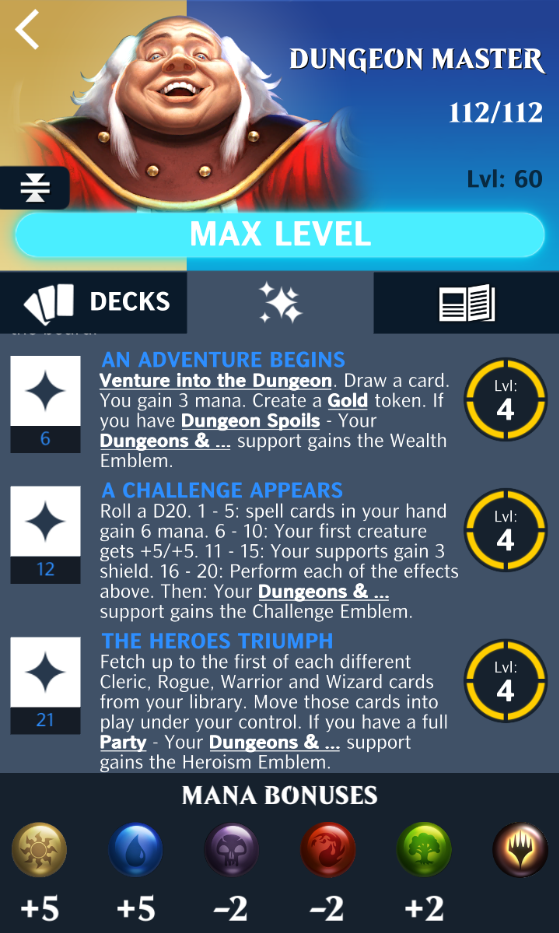 “When you Venture into the Dungeon or Roll a D20: Increase this card's Level by 2.

At the end of your opponent's turn: Draw a card.

If this support has the Wealth emblem: You gain X mana.

If this support has the Challenge emblem: You gain X life.

If this support has the Heroism emblem: Your first creature gets +X/+X. X is equal to this card's Level.”