Crash of the Titans: Don Cheadle vs Josh Brolin 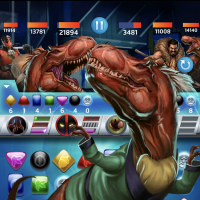 ZootSax Posts: 1,814 Chairperson of the Boards
April 2019 in MPQ Events, Tournaments, and Missions
Champed Warmachine at Lv280 3/5/5 had no problems at all.  Thanos got his purple off once, but promptly matched it away.  I used the red power combined with the green to do decent damage (but the red only created three attack tiles--thanks, RNG).  Thanos' health fell below 7,000, which allowed Warmachine's blue to end things.


The LT was a 4* Captain Marvel champ level with a bonus Prowler (bringing him to 3/3/2), so not too shabby.