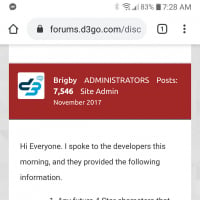 Originally, I had done some statistically testing with latest legendary draws in order to determine how many pulls are needed to get the three 5 star characters fully covered so they could be champed.

Based on the 1:7 odds of pulling a 5 star I came to the conclusion that 273 pulls should generate on average 39 five star covers.

With the removal of the customer service switch, which I call the 'good customer service model', I have found the odds have drastically dropped.    I have three sets of numbers.  Each set has a population of 3, and it is roughly a 11.11% chance to populate any of the numbers.   There is a 33.33% chance that one of the sets will have a number within them populated and that is all we can guarantee.

With the new system, we can call this the 'bad customer service model', once I have any of the individual numbers go past a 5 count, it's value toward champing a character now drops to 1/3rd of it's value.  So in theory there is over a 50% chance that I could pull 14 covers of a character and still not have that character champed. 5 +(1/3rd) + 2 +5 (1/3rd).

To get that guarantee of a 99+% chance for a single 5 star character being covered, I have to toss in the new 1 for 3 exchange system. This means basically 9 more draws per character to make that guarantee. Or basically 63 more pulls per characters, because guess what people, 5/0/5 models happen.  Oh and that 63 has to be multiplied by 3 (63 x3 = 189).

So I am looking at telling people to horde 189 + 273 for a total of 462 for basically that 99+% chance to get a single 5 star character fully covered from the latest legendary.

Let's say you have the 5/1/5 model.  You have a 33 percent chance to get the middle number. (If that character was chosen another which is another 33% chance). True odds are 11.11%.    Once you get up to 3 covers, you can't save any more, you have to use or lose. This is literally a loss of 2 post champion levels.

Statistical update overview changed after they went from 5 to 1  to a 3 to 1 exchange model.