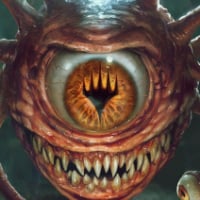 This card is only returning opposing vanguards. If the opponent doesn't have vanguards in play, it doesn't let you chose an opposing target creature to bounce.

As you can see on the following video, I cast it several times and that first chapter did nothing. I cast it one turn, Greg destroyed it the next turn with Demolish, I cast it again the following turn and wasn't able to return nothing.