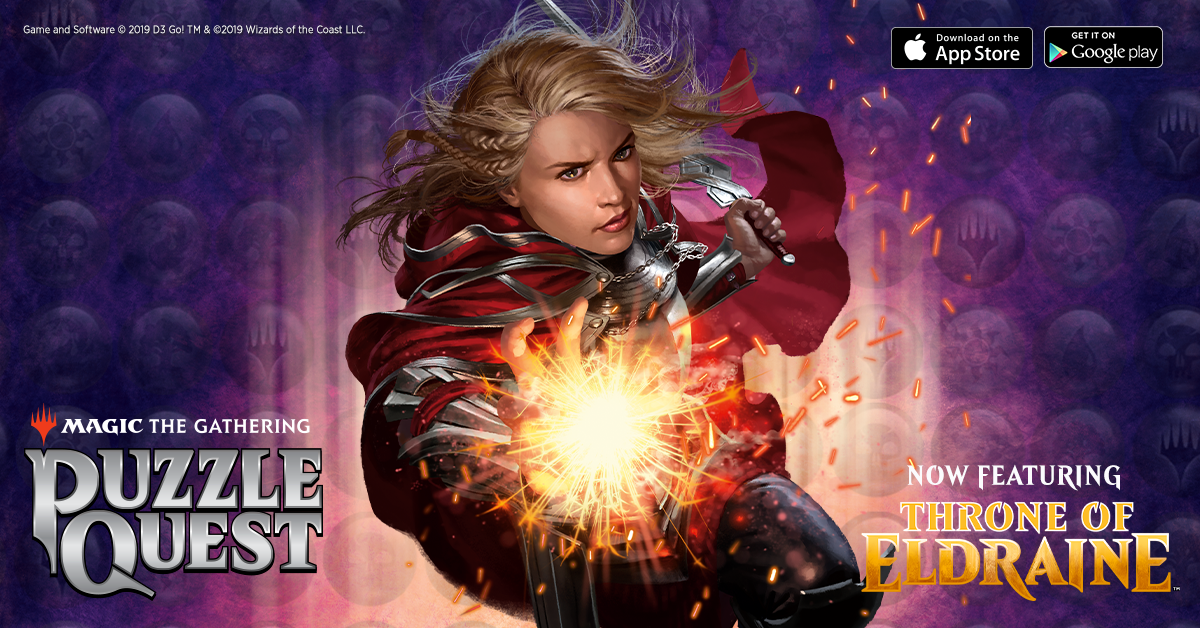 Throne of Eldraine has arrived!

Once upon a time, there was a storybook land of knights and faeries called Eldraine. A mystical land where five courts of the Realm fight for honor and glory, and now this epic adventure has arrived in Magic: Puzzle Quest!

Get your hands on over 250 new cards, 3 new Planeswalkers, 3 new events, and more! Check out all the details below:

Whenever a card goes to the Graveyard or is Exiled, a visual feedback will appear near the affected Planeswalker's portrait. This feedback will display both the icon of the card's zone, the amount of cards moved this way, and the current number of cards there.

This animation will also occur simultaneously alongside other gameplay actions.

VIP Legacy Pack *New Update*
This booster pack has now been updated to include the card sets that are now in Legacy format.


AI Improvements
Starting with Throne of Eldraine, the AI will not prioritize targeting their own cards with negative effects, such as dealing damage or destroying creatures with spells. Also, most of the time it will prefer to buff its own creatures, instead of the opponents.

Note that this improvement does not change the behavior of any card in the game, but rather just the way the AI decides to use them. Players will still be able to target their own creatures or Planeswalkers with effects that could affect "any target".

"Driven mad, the Chain Veil's influence compelled him to hunt and kill other Planeswalkers. For many years, Garruk was feared throughout the Multiverse as a merciless killer, until the curse was finally broken by the Planeswalker twins Rowan and Will Kenrith." 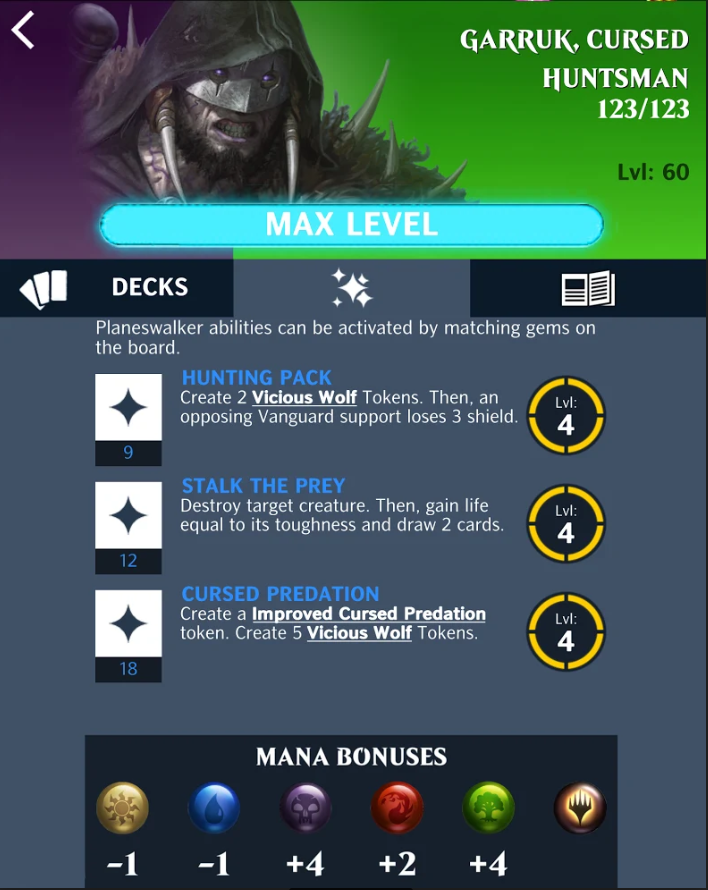 Vicious Wolf
(Black / Green) Creature - Wolf (2/2) Berserker
"Whenever a creature you control dies or loses a reinforcement, you gain 1 Loyalty and your black or green Vanguards gain 1 shield."

"Oko is from a plane ruled by Fey who believe in a unified society, where the ruling class has decided that for the betterment of all, the natural mischievousness of the Fey has to be suppressed. To them, they had created a perfect society - but for Oko, who was born with incredibly powerful shapeshifting abilities, this culture went against everything he was and contradicted his deepest, truest self." 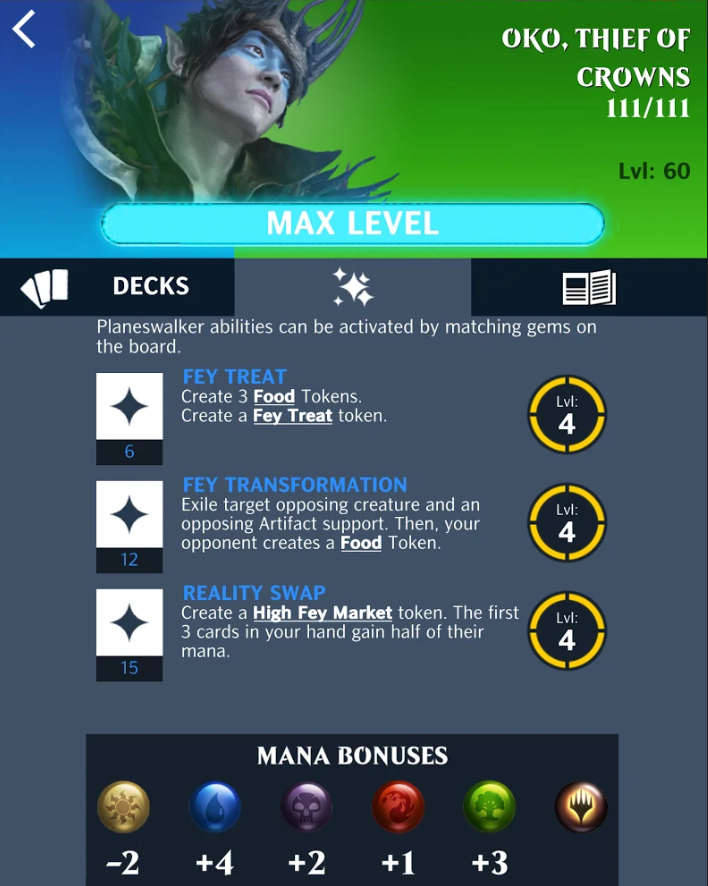 Food
(Colorless) Support Card (1) - Token
"Whenever you destroy or match this support's gem, you gain 3 life. This support can't be reinforced."

Fey Treat
(Blue / Green) Support Card (2) - Token
"Whenever a Food Token you control is destroyed or loses shield, fetch the first card from your opponent's library."

If you can't, exchange the first Artifact support you own without mana from your hand for the first support from your opponent's hand. Then, creatures you control but don't own get +4/+4."
The Royal Scions

"Rowan and Will Kenrith are the eldest children of King Kenright, high king of Eldraine. Their stepmother Queen Linden (mother of their younger siblings) became regent after their father went missing under suspicious circumstances.

Rowan and Will, having just come of age, set out to rescue him." 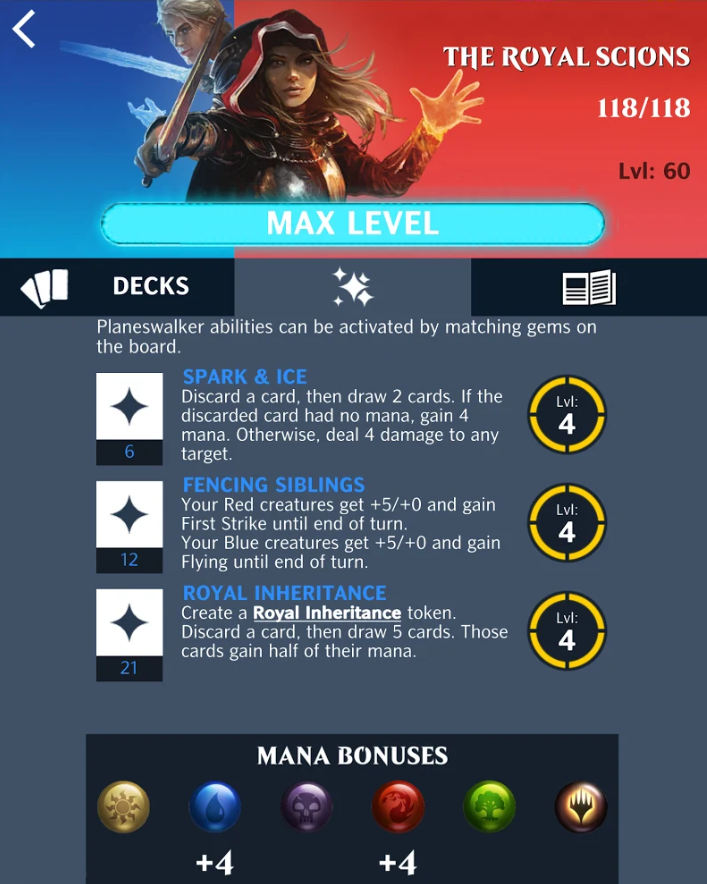 Royal Inheritance
(Blue / Red) Support Card (4)- Token
"Whenever you cast a Red card, this support deals damage to your opponent's Planeswalker equal to the number of Red cards in your hand.

Whenever you cast a Blue card, drain mana from the first noncreature card in your opponent's hand equal to the number of Blue cards in your hand."

Adventure
When you cast the Spell side of a card with Adventure, return only the Creature side of the card to your hand.

Adamant - "Color"
An Adamant ability becomes active until the end of turn whenever you match 3 or more gems of the specified color.

Food
Food tokens are artifact supports with 1 shield. They cannot be Reinforced. Whenever you destroy or match this support's gem, you gain 3 life.

Mill
A Mill ability is active for as long as there are X or more cards in your opponent's graveyard.

Resourceful
Whenever you draw a card, if that card is not the first card you drew this turn, trigger this effect. This happens up to X times per turn.

The Great Tournament - Coalition PvP
"The King has returned and all of Eldraine is celebrating! The courts have gathered to promote the greatest tournament of all time. Now it is up to you to choose a modality and do your best to defeat the other contenders."

Challenge of the Courts - PvP

Fables of Eldraine - PvE
"Sit and listen, watch and dream. I'll tell fables and chants and hymns. Mischief, battles and rays shone: A great reward to call your own."

Looking for fantastical creatures and allies to join you on your adventure? There will be a brand new selection of special offers available in 3.9, so keep an eye out in the Vault, so you can snag them while you can!

With Throne of Eldraine arriving in MTGPQ, this places it as the 9th card set to enter the current Standard Format rotation, which means the 4 oldest card sets will then rotate into Legacy.

Please check out the changes to both Standard and Legacy formats below:

Trial of the Planes
Booster reward has been updated to ELD Booster Pack.

The Elderspark
The node recharge time has been adjusted from 6 hours to 8 hours.